Olympic memories: Blood in the water

(CNN) -- Despite Baron de Coubertin's intention that the modern Olympics should promote a "spirit of friendship" among nations, the Games have never been as immune to the wider currents of international affairs as their founder had hoped. 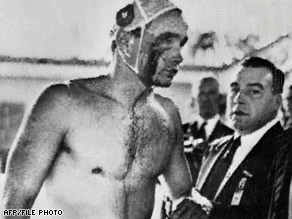 Hungarian water polo player Ervin Zador is covered in blood in the 1956 match against the Soviet Union.

Few sporting encounters however have been as loaded with political symbolism as Hungary's water polo semifinal against the Soviet Union in Melbourne in 1956.

The Hungarian Olympic team had left for Australia shortly after the beginning of the uprising that would briefly topple their country's hardline Communist rulers.

From the other side of the world they watched as Soviet tanks rolled toward Budapest, crushing the new regime under their tracks.

Protesters were gunned down in the street, while thousands were imprisoned and executed, including Imre Nagy, the leader of the ill-fated revolt whose withdrawal of Hungary from the Warsaw Pact and declaration of neutrality had prompted Soviet intervention.

With the United Nations -- already divided over the Suez crisis and unwilling to risk an escalation of Cold War hostilities -- powerless to act, Hungary's Olympic team became an icon of their country's doomed struggle for freedom.

One night early in the Games, the red star in the center of the Communist Hungarian flag that flew over the Olympic village was ripped out and replaced with the Kossuth Arms -- a defiant symbol of Hungarian independence.

It was, therefore, spectacularly inappropriate that Hungary and the Soviet Union should meet in something so trivial as a water polo match when their compatriots had been involved so recently in real battles on the streets of Budapest.

For Hungary's players, however, Olympic champions in 1952, the match represented a chance to strike a blow against their oppressors.

"In the strained political situation we were in, it was a body-to-body encounter with our opponents," recalled Hungarian player Gyorgy Karpati.

"Now I have to admit that I'm convinced even the referee was pulling for us. We were from a small country battling the huge Soviet Goliath."

Played in front of a packed stadium, mainly occupied by Hungarian-born Australians, the atmosphere was charged from the start.

When Dezso Gyarmati caught a Soviet player on the chin with his fist -- by accident or design -- as he wound up to shoot Hungary in front, the crowd cheered both the goal and the outbreak of hostilities.

Hungary continued to dominate in the water, with star player Ervin Zador scoring twice, but the temperature of the match rose steadily in a series of violent clashes.

When Zadorof, the water stained red around him, was forced to leave the pool bleeding badly from a facial wound, the encounter reached boiling point.

The match was abandoned as the crowd spilled down to the pool side and the violence looked set to escalate into the stands.

Hungary, who led 4-0, were awarded victory while the Russians left with a police escort.

Hungary went on to collect the gold medal, yet any satisfaction the team may have felt was tempered by the knowledge that many of them had already decided that they could not go home.

Most chose exile in Australia and the United States, rather than returning to a country that they no longer recognized as their own.

All About Olympic Games • Hungary • Communism