(CNN) -- In the history of the modern Olympics few, if any, performances have captured the popular imagination in quite the same way as that of American Jesse Owens at the 1936 Berlin Games. 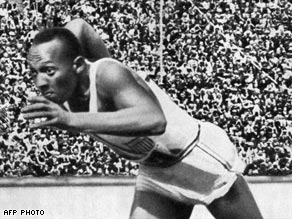 His haul of four gold medals -- in the 100 meters, 200 meters, long jump and 4x100 meters relay -- would have been a notable achievement under any circumstances, especially since two of his victories resulted in new world records.

What gave his feat its unique resonance, however, was the fact that it took place at a Games organized by Hitler's Nazi Party, and specifically designed as a showcase for white Aryan talent.

As a black man, Owens' quadruple triumph was a huge embarrassment to the hosts, and a defiant snub to the Third Reich's theories of white racial supremacy. No other sporting performance before or since has achieved quite the same level of symbolism.

The 11th Olympiad had been awarded to Germany in May 1931, two years before Hitler and his Nazi party came to power.

Their overtly racist policies -- including the exclusion of all Jews and gypsies from German sporting facilities -- led to widespread calls to either move or boycott the competition, especially in Europe and the U.S.

Despite that the Games went ahead, with 49 countries and a total of 4,066 athletes participating, more than in any previous Olympics.

From the outset the Nazi propaganda machine made the most of the opportunity presented by the Games. For their two-week duration -- from August 1-16 -- houses and monuments throughout Berlin were decked with Nazi flags and banners, while posters and magazine spreads lauded the ideal of the white Aryan athlete, making an overt link between the racial purity of modern Teutonic culture and that of classical Greece.

At the same time stringent efforts were made to play down the darker aspects of Nazi ideology, including the removal from Berlin's streets of all anti-Jewish signs, and an order that foreign nationals were not to be subject to Germany's oppressive anti-homosexual laws.

It was against this background of tightly regimented Nazi showcasing that, on August 3, Owens started competing in Berlin's 100,000-seater Olympic Stadium, winning his first gold medal in the 100 meters (equaling the Olympic record with his time of 10.3 seconds).

Over the next six days he would take a further three golds, in the process setting two new world records -- for the 200 meters and 4x100 meter relay -- and incensing the Nazi authorities (Joseph Goebbels, the minister for propaganda, privately described his victories as "a disgrace").

The Owens myth is admittedly not quite as clear-cut as it has sometimes been presented.

German spectators were open in their admiration for the American, and he would probably have not won the long jump gold had it not been for advice given to him by his main rival in the event, the star German athlete Luz Long.

His place in the 4x100 meter relay team, meanwhile, was only secured when American team managers dropped two Jewish athletes -- Marty Gluckman and Sam Stoller -- allegedly at the behest of Hitler himself.

Claims that the latter refused to shake hands with Owens were also unfounded -- the German leader had been told at the start of the Games that he should either shake every athlete's hand or none, and had chosen the latter option.

Despite that, and the fact that Germany still came top of the overall medal standings, the domination of a black athlete at a Games so overtly dedicated to promoting the ideal of Aryan physical perfection proved hugely symbolic for, and satisfying to a world increasingly alarmed at the activities of the Third Reich.

There is a depressing coda to the Owens story, however, for the hero of the Berlin Games subsequently returned home to an America that was itself tainted by profound racial discrimination.

Although he received a New York ticker-tape parade, he was snubbed by President Roosevelt, and, because of his color, failed to attract the commercial sponsorship deals awarded to his fellow white athletes.