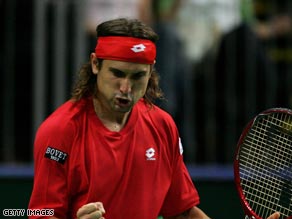 Gicquel rallied to beat Guillermo Canas 3-6 6-0 6-4 to give himself the chance of claiming his first ATP title in a nine-year career.

The 31-year-old, who will be competing in a final for the third time, has beaten Ferrer in their two previous encounters, at Metz in 2006 and at Lyon in 2005.

Ferrer, ranked fifth in the world, never dropped his serve against Del Potro.

Each player lost their serve twice at the Wimbledon warm-up tournament. Fourth-seeded Karlovic served 11 aces, but the eighth-seeded Monfils could not manage one.

In the final Croatian Karlovic will face third-seeded Fernando Verdasco of Spain, who beat another Croat, Marin Cilic, 6-3 6-1.