(CNN) -- Thai qualifier Tamarine Tanasugarn won her first title on grass when she beat third seed Dinara Safin 7-5 6-3 in the final of the Ordina Open in Den Bosch. 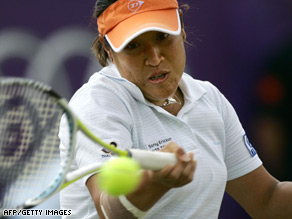 Tanasugarn played the final with a bandaged thigh.

Tanasugarn played with a bandaged thigh and after wrapping up victory with a forehand winner she said: "I guess my play suits well for the grass.

"Many thanks to all of you who have come to watch and support me."

Safina, the 2006 runner-up in Den Bosch and a semifinalist last year, said Tanasugarn had been the better player.

"She has a lot of experience and she played well today," Safina said.

Poland's Agnieszka Radwanska picked up her third title of the season by beating defeating Nadia Petrova 6-4 6-7 6-4 to win the Eastbourne Championship.

The 19-year-old, ranked 14th in the world needed two hours 37 minutes to complete the victory, which maintained her 100 percent record in finals.

She won her first trophy in 2007 at Stockholm and this year triumphed at Pattaya City and Istanbul before claiming her first success on grass at Eastbourne.

Petrova said she was struggling to explain why she played poorly in the final set.

"It was a very strange game at 4-4 on my serve," Petrova said. "It was two easy mistakes and I have no idea where they came from. I don't remember getting nervous or thinking ahead of the game, but maybe just the fatigue kicked in."