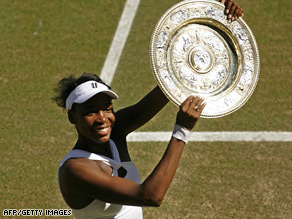 For the second year running Venus Williams holds the trophy aloft at Wimbledon.

Venus, seeded seventh, was defeating sixth seed Serena in the final for the first time -- after the younger Williams had won both of their previous Wimbledon showdowns in 2002 and 2003.

Serena was a break up in each set but Venus battled back to secure victory in one hour and 51 minutes. "First I have to say great match to Serena," said Venus, 28.

"I can't believe that it's five titles. When you are in a final with Serena five seems so far away from that first point. She played so awesome it was a real task to beat her."

Asked how hard it was to play against Serena, Venus added: "My first job is big sister and I take that very seriously!"

Serena was philosophical in defeat, adding: "She was a little better today, it didn't work out the way I planned. But it's definitely a great celebration for our family. We're really happy.

"I've been working really hard and fighting for everything and I'm so happy at least one of us was able to win. We're just glad to be in the finals again and we hope it can keep happening."

Seeking a third title at the All England Club, Serena made the perfect start with a break of serve in the opening game of the match.

The 26-year-old led 2-0 and won 10 of the first 11 points before Venus began to battle back into the match. The champion broke back to level at 4-4 and gradually gained the upper hand.

Another break of serve in the 12th game gave Venus the set 7-5 after 53 hard-fought minutes. Venus then held serve in the opening game of the second set, helped by a record-equalling 129mph serve.

However, she was unable to repeat the trick in her next service game, saving six break points but slipping over beyond the baseline on the seventh to give Serena the advantage.

That game had taken 14 minutes and many others were proving long, drawn-out battles from the baseline as the siblings traded thunderous serves and groundstrokes.

Venus immediately broke back to level at 2-2 and the next five games also went with serve until Venus forged two match points on her sister's serve in the 10th game.

Serena saved the first with a thumping ace but an errant backhand on the second gave Venus her fifth Wimbledon title.

The sisters joined forces later to win their third Wimbledon women's doubles title with a 6-2 6-2 victory over America's Lisa Raymond and Samantha Stosur of Australia in 59 minutes.

It was their seventh Grand Slam doubles crown.

Robson, who was born in Australia but moved to England when she was six, beat third-seeded Noppawan Lertcheewakarn 6-3 3-6 6-1.

"Being Wimbledon girls' champion sounds really good," Robson said. "It was great today because the crowd were behind me and it was such an experience.

"I didn't feel relaxed and composed. I thought I was going to be sick when I walked onto court because there were so many people watching. In the second set I went a bit mad but got it back together and managed to win."

Robson is the youngest girl's champion since 13-year-old Martina Hingis won in 1994, and the first British singles champion at Wimbledon since Annabel Croft won the girls' title in 1984.

Canada's Daniel Nestor and Nenad Zimonjic of Serbia won the mens' doubles title with a 7-6 6-7 6-3 6-3 victory over Jonas Bjorkman of Sweden and Kevin Ullyett of Zimbabwe.

Nestor and Zimonjic were runners-up at the French Open last month but Bjorkman and Ullyett were playing in their first major final as a team.

Nestor had already won three Grand Slam titles with Mark Knowles at the 2002 Australian Open, the 2004 US Open and the French Open in 2007.

Bjorkman, bowing out at Wimbledon,had claimed doubles titles there, with Todd Woodbridge from 2002-2004, in his nine Grand Slam successes.