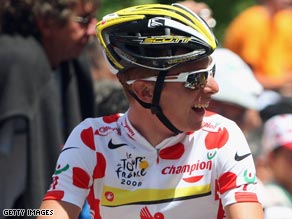 Ricco was leading the King of the Mountains competition before his exclusion from the Tour de France.

Team manager Mauro Gianetti said both Ricco and his compatriot Leonardo Piepoli, who was also kicked out even though he did not test positive, had infringed the team's code of ethics.

The 24-year-old Ricco won two stages on this year's race but left the Tour under a police escort on Thursday after testing positive for the banned blood booster after the fourth stage time trial.

The 36-year-old Piepoli won the prestigious 10th stage to the summit finish of Hautacam in the Pyrenees ahead of team-mate Juan Jose Cobo, who has not been implicated.

The entire Saunier Duval team left the Tour of their own accord prior to Thursday's 12th stage, following the announcement of Ricco's test.

Gianetti's integrity as manager of the Spanish team has come under attack from Tour chief Christian Prudhomme. "After speaking to the management of Saunier Duval this morning they decided to leave on their own accord," Prudhomme said on Thursday.

"But in general, I certainly don't feel that their manager is a model of virtue."

He added: "There's two ways to look at how they left the race. One is to say they are responsible for Ricco's positive test, but that would make it appear like an admission of guilt. The future will reveal more to us, hopefully the near future."

Swiss Gianetti said on Friday that he was "totally unaware of any doping practices going on in the team".

"Despite all of our efforts -- trusting the effectiveness of internal and external tests -- we haven't been able to avoid this absurd situation and today, as a team, we feel like victims," added Gianetti.

The news of the double sacking emerged only minutes after Ricco appeared at a court in Foix, near the Pyrenees, to answer charges relating to his positive drugs control. The possession, use and administering of banned substances is against French law.

Ricco was held overnight by police and released under judicial watch on Friday after French officials filed preliminary charges against him. He was ordered not to speak to anyone from his team.

"I slept in jail and then the magistrate listened to all I had to say," Ricco told Italy's RAI state TV. "Then they searched my bag but they didn't find anything except the usual vitamins we all use, so they decided to send me home."

Saunier Duval, meanwhile, have indicated they may pull out of sponsorship of professional cycling.

Top company official Thierry Leroy told French radion station RTL on Friday: "It is highly probable that we will pull out of sponsoring cycling following this affair."

Leroy said he was "disappointed and angry" and was ready to launch legal proceedings against the team if organised doping was proven.