(CNN) -- World number one Rafael Nadal reached the fourth round of the US Open, winning the final 11 games to complete a 6-4 6-3 6-0 victory over Serbian Viktor Troicki. 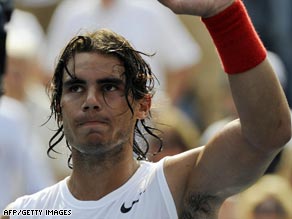 Nadal is bidding to become the fourth man in the Open era to win three successive Grand Slams.

The Spaniard Nadal, chasing a third consecutive Grand Slam and his first at Flushing Meadows, won for the 41st time in 42 matches.

"I'm very happy. I knew it was a tough match," Nadal said. "He's a big server and very tough."

"I'm very happy at what I've done this year," Nadal said. "I will just focus on my next match because every match is difficult. He's playing very well. I will have to play very well if I want to advance."

Nadal, who also beat Troicki in the first round of this year's Australian Open, broke in the final game of the first set.

The 71st-ranked Serbian created a break opportunity in the third game of the second set and converted it when Nadal netted a forehand.

Nadal broke back for 3-3 and did not yield another game.

"I had a good passing shot on a break point that gave me a lot of confidence that I could win," Nadal said.

After capturing Olympic gold at Beijing, Nadal is trying to become only the fourth man to win three Slam titles in a row in the 40 years of the Open era, joining Roger Federer, Pete Sampras and Rod Laver.

Nadal, seeking his ninth title of the year, defeated Federer in the French Open and Wimbledon finals and moved past him to head the rankings on August 18 after being second for a record 160 weeks.

Querrey, who won his first career title this year at Las Vegas, fired 20 aces and made only 13 unforced errors without surrendering a service break to make the last 16 at a Grand Slam for the first time.

"I won the first set. That was cool. After the first set I was pretty pumped up," Querrey said. "I've gotten a lot better since then. He has too. So I can go out there and rip away. I have nothing to lose.

"Pretty much it's just step up and rip it."

The 10th seed Stanislas Wawrinka who helped Roger Federer to win a gold medal for Switzerland with a doubles triumph at the Olympics, had a tough struggle before overcoming Italian Flavio Cipolla 5-7 6-7 6-4 6-0 6-4.

Wawrinka will now meet Scottish sixth seed Andy Murray, who staged another marathon fightback to get past Austrian Jurgen Melzer 6-7 4-6 7-6 6-1 6-3.