(CNN) -- Russia's Dinara Safina continued her impressive run of recent form by sweeping past Germany's Anna-Lena Groenefeld to reach the last eight of the U.S. Open on Monday. 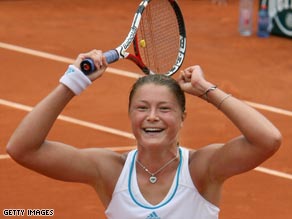 Safina is continuing the form she showed in reaching the final of the French Open earlier this year.

The sixth seed was given a stern first set test by Groenefeld, but then saw her opponent completely collapse in the second set, as the 22-year-old Safina secured her quarterfinal place with a 7-5 6-0 victory.

Safina's 18th victory in 19 matches ensures she will now face Italian Flavia Pennetta for a place in the Flushing Meadows semifinals.

Pennetta, seeded 16, proved too strong for former Wimbledon champion and world No.1 Amelie Mauresmo, going through 6-3 6-0.

Safina has won three titles and was runner-up at the French Open earlier this year, giving credence to the argument she is the most in form of all the women's players on the WTA Tour.

Along with Elena Dementieva, the pair are the only Russian women remaining in the singles draw -- the lowest Russian representation at a grand slam since 2004.

If Safina wins the singles here, she will become the new world number one if Jelena Jankovic does not advance past the semifinals.

Former champion Serena Williams, who takes on wild card Severine Bremond of France in the night session, also has a chance to replace Serbian Ana Ivanovic at the top of the rankings.