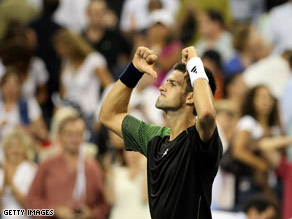 Novak Djokovic celebrates after defeating Andy Roddick at the U.S. Open on Thursday.

The Flushing Meadows crowd was enraged by comments the Serbian made in his post-match interview in which he criticized home favorite Roddick in no uncertain terms.

Djokovic had been angered by apparently light-hearted remarks made by Roddick in which he accused the world number three of feigning injuries.

"That's not nice, anyhow, to say in front of this crowd that I have 16 injuries and that I'm faking," Djokovic blurted out after his four-set victory.

"They're already against me, because they think I'm faking everything."

In Djokovic's last 16 match, a tough five-setter against Tommy Robredo, the reigning Australian Open champion called for the trainer several times as he dealt with hip, ankle, stomach and breathing issues.

Asked then about Djokovic's problems, Roddick joked whether the list shouldn't also include bird flu, anthrax, SARS and a common cold and said:

"He's either quick to call a trainer or he's the most courageous guy of all time."

What most irritated Djokovic was what Roddick said in an on-court interview on Tuesday: "I've got to feel good. He's got about 16 injuries right now."

The remarks certainly acted as motivation, but he owed his 6-2 6-3 3-6 7-6 victory to uncharacteristic serving errors by eighth seed Roddick.

After working his way back from a huge deficit, Roddick was two points from forcing a fifth set at 5-4, 30-love in the fourth.

But he double-faulted twice in a row and was broken for the fifth time -- twice more than he lost serve in his first four matches combined.

"You know what? I honestly don't feel like they were super-tight doubles," Roddick told the Associated Press.

"I had been playing pretty high-risk, high-reward tennis to get back and I probably wasn't about to stop."

Roddick was also asked about his verbal squabble with Djokovic and immediately apologized.

"It was completely meant in jest," Roddick said, pausing to choose the right words. "I should know better. But listen, I joke all the time. I don't think anyone in their right mind takes me serious."

Both men spoke in private after the incident and Djokovic was also contrite in his post-match press conference.

"He made a joke and it was a misunderstanding, so I don't blame it on him," Djokovic said.

"Maybe I exaggerated and reacted bad in that moment. I apologize."

Third seed Djokovic was advancing to a semifinal meeting with former world number one Roger Federer, a rematch of last year's U.S. Open final, which Federer won for his fourth consecutive title at Flushing Meadows.

Federer -- bidding for a 13th major title, one shy of Pete Sampras' record -- beat qualifier Gilles Muller 7-6 6-4 7-6 earlier on Thursday, again looking less than convincing in extending his own record by reaching the semifinals at an 18th consecutive grand slam tournament.

New world number one Rafael Nadal will face Britain's Andy Murray in the other semifinal on '"Super Saturday."

The men's semifinals and women's final are all scheduled for Saturday, but tournament organizers have seen forecasts calling for about 12 hours of rain and wind at up to 35 mph that day.

So they began the process of negotiating with TV networks and preparing contingency plans, including weighing the possibility of announcing Friday that no tennis would be played Saturday, and that the men's final would be shifted from Sunday to Monday.