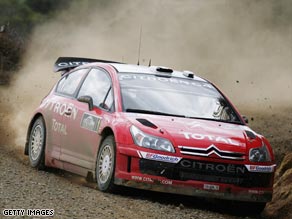 A victory this weekend will put Loeb on course for a record-breaking fifth world title success.

The Frenchman goes into Saturday's second day with a 44.1second lead over Ford's Mikko Hirvonen, who started the race in second place in the title standings, eight points behind Loeb.

Loeb has won this race for the last three years and victory on Sunday will put him well on the road to a record-breaking fifth drivers' title with just three events left in the 2008 season.

"It's been a very, very good day," said Loeb. "The car was perfect and the feeling is good. Fifteen seconds at the end of today is a good result."

Hirvonen finished the day in fourth place and the Finn admitted he had struggled to match Loeb's blistering pace.

"I won't be able to catch him through driving alone," said Hirvonen. "The Citroens just got away in the morning. The afternoon was better for me but it's not enough. Now we have to try and minimize the damage and see what we can do."

Belgium's Francois Duval is third overnight in a Ford Focus, 41.3 seconds behind Loeb but enjoying the challenging asphalt track. "I'm happy because I've been fast in some difficult conditions," he said.

"There was a lot of gravel on the road in the afternoon, but our times have been good and we've improved as the day went on. Tomorrow's stages are a bit different -- we'll see how we get on."