(CNN) -- Sebastien Loeb marched towards a fifth consecutive world title with his fourth successive victory at his home Rally of Corsica on Sunday. 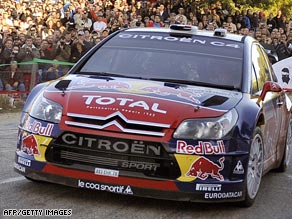 Loeb, who last weekend won the Rally of Spain for the fourth successive year, was delighted after winning all but two stages of the Corsican race.

"It's getting better and better," he said. "To win here in Corsica is a great moment. We were much faster all rally and that's great for me and the team. We'll add another two more points to our championship lead. So okay, we'll see how we get on in Japan."

Hirvonen now trails by 14 points ahead of the trip to Japan from October 31-November 2, with the season-ender at the start of December at the Wales Rally GB.

Duval and Latvala were happy to play their part in keeping Ford's title hopes alive.

"I am so happy," said Duval. "That's two rallies with no mistakes and no punctures. It's been a long time since I've driven such a good car on tarmac."

"We want to do everything we can for the team," Latvala said. "Of course personally I'm disappointed, but nobody can take away the experience and the confidence I have got here. It'll be a completely different story on the gravel rallies which follow."

Former world champion Petter Solberg completed the top five in his Subaru Impreza, with the Norwegian completing the final 26-kilometer stage two minutes slower than the leaders after collecting his second puncture of the day.

"I was driving carefully, so I don't know why it happened," he said. "I didn't feel I hit anything. But that's how it is. I tried hard from that start, and that's it."

Australia's Chris Atkinson was sixth, while Urmo Aava of Estonia and Britain's Matthew Wilson followed him to also pick up points.