(CNN) -- A century from Yuvraj Singh helped India condemn England to one of their heaviest defeats in a one-day international (ODI), with a comprehensive 158-run victory in Rajkot, India Friday. 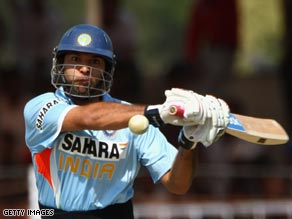 Yuvraj Singh hit his ninth century in one-day internationals for the home side.

Chasing India's total of 387-5 after Yuvraj Singh hit a brilliant 138 off only 78 balls, England's reply stalled before it had barely even started, as Matt Prior edged a Munaf Patel delivery to Virender Sehwag and Owais Shah did likewise to a Zaheer Khan ball, before Andrew Flintoff was trapped lbw by Zaheer.

Captain Kevin Pietersen did his best to stop the rot with 63 runs at better than a run a ball while his partners continued to fall by the wayside, but all hope had already been lost by the time he was run out by Ishant Sharma.

The lower order showed more resolve than the recognised batsmen, and the runs of Samit Patel (23), Ravi Bopara (54 not out) and Stuart Broad (26) took England past their revised target of 222, sparing them the shame of succumbing to their record one-day defeat.

The defeat in the first of seven series was their heaviest batting second in a one-day international since the 165-run loss against West Indies in St Vincent 14 years ago and Pakistan in Karachi in 2005.

By contrast, Sewag and Gautam Gambhir were the other heavy scorers for India with 85 and 51 runs respectively, as the hosts posted their second-highest ODI total ever -- well behind the 413-5 against Bermuda in the 2007 World Cup but ahead of their previous home record of 376-2 against New Zealand in 1999.

Yuvraj needed a runner after injuring his back, and did not field during England's 37.4 overs innings.

"When Pietersen was bowling I pushed for a second run really hard and I think I slightly pulled my back," he explained. "I wasn't surprised they gave me a runner because it was an injury from the match - I wasn't carrying the injury into the match.

"I was struggling with the pain so it was good to have a runner. We'll have to assess whether I will be fit for Monday but I'm looking forward to it."

India skipper Mahendra Singh Dhoni was delighted with such an emphatic opening victory.

"It was critical to start on a good note. We lost the toss but we also wanted to field," he said. "We bowled brilliantly and we knew the (England) batsmen had to take risks. We bowled in the right areas.

"On a day like this I don't think the opposition could do much (about Yuvraj). He was batting at his best. Everybody chipped in, but Yuvraj stood out."

Both teams travel to Indore for the second match of the series on Monday with India, fresh from their Test series win against Australia, in impressive form with both bat and ball.

"There are definitely improvements we can make and I'm not exactly excited by the fact that on that wicket we were 40-4. I think there are definitely areas where we can improve, and I think we can give them a good run for our money on Monday."

Meanwhile, Pakistan took an unassailable 2-0 lead in the one-day series against the West Indies in Abu Dhabi, winning by 24 runs on Friday.

In a series played away from Pakistan due to security concerns, the 'home' side were bowled out for 232 in 49 overs with Misbah-ul-Haq top-scoring on 52 and Kamran Akmal making 45.

Fast bowlers Daren Powell and Jerome Taylor claimed three wickets each, but Pakistan recovered from the early loss of both openers and a middle-order collapse which left them 87-4.

The West Indies lost captain Chris Gayle and fellow opener Sewnarine Chattergoon for ducks to be 14-2 but Shivnarine Chanderpaul and Ramnaresh Sarwan (45) put on 92 in 23 overs to revive their hopes of saving the series.

However, veteran left-hander Chanderpaul was left stranded on 107 not out after two costly runouts and a three-wicket burst by seamer Umar Gul.

Gul claimed two wickets in the 49th over to seal the victory ahead of Sunday's final match.