(CNN) -- Star flyhalf James Hook suffered an injury blow as a much-changed Wales side needed two second-half penalty tries before beating unfancied Canada 34-13 in a one-off Test at the Millennium Stadium in Cardiff on Friday night. 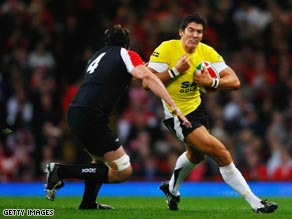 James Hook of Wales, right, is challenged by Tyler Hotson of Canada before going off with a knee injury.

The Six Nations champions struggled to dominate the North Americans after coach Warren Gatland retained only three players from the side who gave world champions South Africa a scare before losing 20-15 last weekend.

One of that trio, young winger Leigh Halfpenny, scored two of the home team's five tries, with the other going to fullback Morgan Stoddart.

Debutant flyhalf Dan Biggar kicked three conversions and a penalty after coming on to replace the injured Hook after only 18 minutes.

Hook is now doubtful for next weekend's glamour home clash with New Zealand, having limped off with knee tendon problems.

Canada arrived in Cardiff fresh from a 55-0 drubbing against Ireland, but took an early 3-0 lead through the boot of James Pritchard and trailed only 10-6 at halftime to stun the 55,000 home crowd.

Wales, wearing a new change kit of gold shirts, struggled under Canada's high-kick barrage but finally broke through in the 25th minute when Stoddart squeezed over in the corner for his seventh try in nine games this season.

Pritchard put the visitors ahead with a second penalty in the 33rd minute, but the 19-year-old Halfpenny made sure his side went into the interval ahead with his first try on 39 after a top-class finish.

A Biggar penalty extended the lead to 13-6, then coach Warren Gatland replaced skipper Ryan Jones and debutant scrum-half Martin Roberts with Andy Powell and Dwayne Peel in the 50th minute.

A penalty try, awarded against the Canadian front row, quickly followed and Biggar added the extras for 20-6 before the visiting scrum was penalized with another seven-pointer in the 71st minute after collapsing again.

However, Canada hit back as center Ryan Smith intercepted Biggar's pass and dashed to the try-line, but Halfpenny went over in injury-time with the final move of a frustrating game for the Welsh camp.

"It was really tough," said flanker Dafydd Jones. "We knew it was going to be hard to break them down, but in all honesty it was harder than we thought.

"They came here and made it really tough. The wingers kept us in the game, to be fair. We tried to play but we turned the ball over, gave penalties away and brought their backs into the game.

"They picked the game up and generally made it tough. We were our own worst enemy. We kept losing ball and you can't do that, whoever you're playing."