(CNN) -- India's cricket tour of Pakistan, scheduled for January and February next year, has been called off -- the Indian government have confirmed. 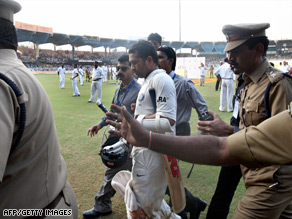 India's current Test series against England has been played against a backdrop of tight security.

The announcement that India would not travel came from sports minister MS Gill in parliament as relations between the neighboring countries continues to deteriorate following the Mumbai terror attacks.

Indian Cricket Board officer Ratnakar Shetty confirmed they had been notified about the government's decision although he did not rule out the matches going ahead at a neutral venue.

"No decision has been made on playing Pakistan at a neutral venue," Shetty said. "We have not planned an alternative tour as yet."

India were due to play three Tests, five one-dayers and a Twenty20 international in a tour starting mid-January.

The tour, already in doubt due to the security situation in Pakistan, was put in further jeopardy by the terrorist attacks in Mumbai last month.

Before the incidents in Mumbai, the Indian Cricket Board -- as is normally the case -- sent a letter to the government seeking permission to travel to Pakistan for the tour.

The Ministry of External Affairs had by then already refused permission for a junior hockey team to travel to Pakistan due to safety concerns.

Last week, Gill said he was against the tour going ahead. Several other former India cricketers including ex-skippers Kapil Dev, Sunil Gavaskar and Sourav Ganguly had said India should not tour given the current circumstances between the two nations.

Cricket board vice-president Rajiv Shukla confirmed: "Due to the current political scenario and atmosphere in the country, the government has instructed us to call off the tour.

"We have always made clear that we will follow the government's decision on the tour. Keeping the policy decision in mind, the tour stands cancelled."

Relations between the two countries have become strained following the Mumbai terror attacks last month which claimed the lives of over 160 people. The Indian government has put pressure on Islamabad to take action against Pakistan-based militant groups it says were behind the devastating three-day attacks.

It is the third major cricket tour to Pakistan this year to be called off on security grounds. In March, Australia pulled out of their scheduled visit, while the International Cricket Council (ICC) postponed the Champions Trophy one-day tournament in September.

Pakistan Cricket Board spokesman, Asif Sohail, said that Pakistan were yet to receive official notification of cancellation of the tour, Britain's Guardian newspaper said.

"We can only react after we have been officially informed," Sohail said. "We have not yet received any official communication from the BCCI."

Meanwhile, the BBC has reported that the PCB has invited Sri Lanka to tour in India's place.