(CNN) -- A century from Shivnarine Chanderpaul and 74 from Brendan Nash sparked a West Indies fightback on the opening day of the second Test against New Zealand -- before the hosts struck back with two quick wickets shortly before stumps. 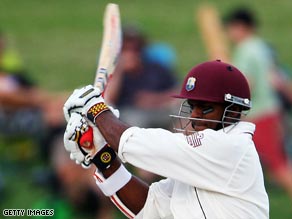 Chanderpaul is again proving the West Indies danger man after his century in the second Test in Napier.

Having been reduced to 74 for four just prior to lunch the pair constructed a patient 163-run stand before Nash was dismissed when he drove a James Franklin delivery straight to Daniel Flynn.

Denesh Ramdin was then clean bowled by Daniel Vettori in the penultimate over of the day to leave the West Indies on 258 for six at stumps at McLean Park in Napier.

Chanderpaul and Nash both brought up their 50s early in the final session after they had clawed the advantage back from the hosts at lunch.

The International Cricket Council's player of the year had taken 147 balls to bring up his half-century but cut loose late in the day to bring up the second 50 in just 67 balls as he reached the close 100 not out with Jerome Taylor on one.

Chanderpaul followed up his record seventh wicket 153-run match-saving stand with Taylor in Dunedin with another crucial innings on a flat wicket in ideal batting conditions.

Captain Chris Gayle would have been disappointed with his top order after winning the toss and opting to bat on a good wicket.

They lost wickets regularly in the first session as New Zealand gained the upper hand with Iain O'Brien taking two wickets for 15 runs and Patel and Vettori chipping in with one apiece.

Gayle (34) was the first to go to a superb first-up delivery from O'Brien which the skipper edged to Brendon McCullum. Three overs later, Ramnaresh Sarwan (11) attempted a cut shot off spinner Jeetan Patel but only succeeded in giving McCullum his second catch.

A piece of brilliant fielding by Jesse Ryder in the slips accounted for Xavier Marshall who managed just six runs before prodding at a ball from O'Brien which Ryder caught diving to his right to reduce the tourists to 63 for three.

Jamie How then got in on the act with a smart catch above his head at second slip to dismiss opener Sewnarine Chattergoon for 13. Again the left-hander never really looked comfortable at the crease taking 72 balls for his 13 runs, which included two fours.

The pair upped the tempo in the final session of the day and Nash was first to reach fifty, his first in Test cricket, with a nice cut shot over the slips for his 10th boundary.

His 162-ball innings was peppered with some lovely cut shots and drives, but he was eventually undone by a loose shot to give Franklin the breakthrough the New Zealanders had been looking for.

The final half-hour of play brought plenty of action with Chanderpaul reaching three figures before Ramdin was clean bowled by Vettori to leave the Test finely poised.