(CNN) -- Patient half-centuries from Daniel Flynn and Tim McIntosh helped New Zealand inch towards the West Indies first-innings total of 307 on day two of the second Test in Napier. 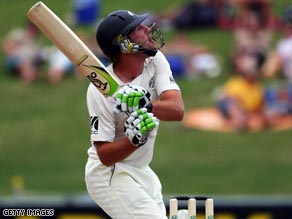 McIntosh is unbeaten on 62 as New Zealand ended the second day 162 runs behind West Indies.

The pair combined for 118 runs before Flynn was caught and bowled by Fidel Edwards late in the day for 57 to become the West Indies paceman's 100th Test wicket.

At stumps at McLean Park, New Zealand had reached 145 for two, 162 runs behind the tourists, with McIntosh 62 not out and Ross Taylor unbeaten on four.

McIntosh faced a wait to reach his maiden Test fifty when play was halted for 50 minutes because of bad light and showers midway through the final session when he was on 44.

But when play resumed the tall left-hander reached the milestone with a lovely drive to the boundary off West Indies skipper Chris Gayle, his 51 taking 181 balls and including seven fours.

Earlier in the day, Iain O'Brien returned career-best figures of six for 75 as the West Indies were dismissed shortly before lunch leaving Shivnarine Chanderpaul stranded on 126 not out as the tourists added 49 runs to their overnight total of 258 for six.

O'Brien took four for 16 in the opening session as Jerome Taylor (18), Sulieman Benn (0), Daren Powell (six) and Edwards (0) all succumbed.

Taylor, Benn and Powell were all caught behind by Brendon McCullum, who ended the innings with five catches, while Edwards was deceived by a slower yorker.

New Zealand survived the first nine overs to lunch without losing a wicket but in the fourth over after the interval Edwards struck with his first ball to dismiss Jamie How for just 12 as his lean spell continued.

That brought Flynn and McIntosh together at 19 for one and the pair dug deep and showed plenty of patience as they slowly chipped away at the West Indies lead.

McIntosh was handed an unlikely lifeline on 14 when he skied an attempted pull shot off Edwards. The bowler and wicketkeeper Dinesh Ramdin both ran to claim what should have been a simple catch but inexplicably they stopped and the ball landed between them to the disgust of Edwards. It was one of few moments of drama as the bowlers largely kept the batsmen quiet.

At one point, the New Zealanders managed just one run in eight overs as Edwards, Gayle and Nash kept them pinned to the crease.

The pressure was eased for a short while as Flynn hit successive sixes off Nash but it was a brief burst and by tea New Zealand had inched their way to 74 for one.

The batsmen showed a little more intent in the spell after tea and Flynn brought up his second half-century in as many Tests with a smart single off Benn, the 125-ball fifty including four boundaries as well as the sixes off Nash.

McIntosh, who had moved from 21 at tea to be just six runs shy of his fifty when the bad light and showers intervened, then joined Flynn in the fifties before watching his partner's 161-ball innings come to an end courtesy of a great catch by Edwards.