(CNN) -- The second cricket Test between New Zealand and West Indies in Napier has ended in a draw, after the home side failed to reach the 312 runs needed to win the match -- and ultimately the series. 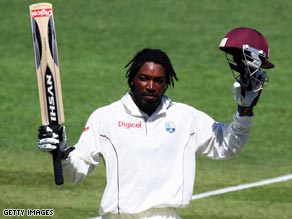 Gayle's McLean Park innings of 197 was his second-highest score in Test cricket.

Captain Chris Gayle made 197, his eighth Test century and second- highest Test score, to guide the tourists to 375 in their second innings after they had trailed New Zealand by 64 runs following the first innings.

Gayle batted for 514 minutes and hit 20 fours and seven sixes from 396 balls in completing his first century since 2005. In the process her passed 5,000 runs and posted the highest-ever Test total at McLean Park.

That left New Zealand with a minimum of 60 overs over two sessions to win the match and, despite half-centuries from Jamie How (54) and Jesse Ryder (59 not out), a steady stream of lost wickets forced the hosts to abandon their run chase and bat out time.

Play was eventually halted with nine overs remaining when captains Gayle and Daniel Vettori agreed no result was possible, with New Zealand on 220-5, still 92 runs away from victory.

The ending of a 74-run fourth wicket partnership between Ryder and Ross Taylor (46) and the dismissal of Brendon McCullum for 19 stifled the New Zealand run chase and consigned the match to a draw.

The draw means the two-Test series ended 0-0, following a similar result in last week's rain-affected match in Dunedin. "Even though no-one won, I thought it was a good series," Gayle told Reuters.com