(CNN) -- The Los Angeles Lakers snapped Boston Celtics' 19-game winning streak with a 92-83 home court win at the Staples Center in the highlight of the NBA's Christmas Day program. 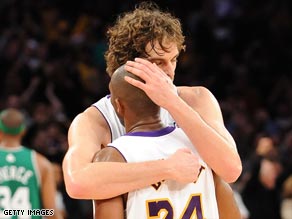 Gasol hugs Bryant as they celebrate an epic victory over the Celtics.

The Lakers finished the game with a 13-2 streak to give coach Phil Jackson his 1,000th career win and gain a measure of revenge for their defeat by the Celtics in last season's NBA finals.

"They had just won 19 straight games so they were due for one," Bryant told ESPN.

"It was a challenge to stop the streak because they were playing so well."

Boston had taken a two-point lead with 3.57 remaining, but Bryant and Gasol worked their magic to send the Lakers' fans home happy. Their team are 15-1 at the Staples Center this season.

The 1972 Lakers hold the all-time winning streak of 33 while Boston now share the fourth-best streak with the 2000 Lakers.

Jackson is the sixth coach to reach 1,000 wins, holding a 1,000-473 record with the Lakers and previously the dominant Chicago Bulls.

Kevin Garnett scored 22 points for the Celtics and Paul Pierce added 20 for Boston who will continue their West Coast swing at the Golden State Warriors on Friday.

In other NBA action, Roger Mason hit a dramatic three-pointer on the buzzer to give San Antonio a fourth straight victory and 10th in 12 games -- 91-90 over the Phoenix Suns.

Amare Stoudemire scored 25 points and 13 rebounds for Phoenix with good back up from Shaquille O'Neal with 23 points and 12 rebounds.