(CNN) -- World champions Italy suffered a calamitous start to their Euro 2008 campaign as they slumped to a 3-0 defeat against an impressive Netherlands side in their Group C opener in Berne. 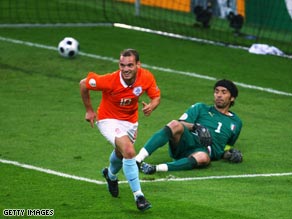 Wes Sneijder wheels away in delight after netting the Netherlands' second goal in their 3-0 victory.

Wesley Sneijder then celebrated his 24th birthday in style by adding a stunning breakaway second on the half-hour.

Italy had numerous chances to reduce the deficit after the restart but Edwin van der Sar came to the rescue, making superb saves from Andrea Pirlo's free-kick and Fabio Grosso's close-range effort.

Van Bronckhorst completed a wonderful evening for Marco van Basten's side by heading past goalkeeper Gianluigi Buffon in the 79th minute as the Dutch celebrated their first victory against the Italians since the 1978 World Cup.

The Azzurri should have taken an early lead but Luca Toni failed to get behind Antonio Di Natale's dangerous cross while, at the other end, Rafael van der Vaart's left-footed strike forced Buffon to dive to his right to clear.

Then in the 17th minute, Netherlands should have broken the deadlock following a defensive mistake by Italy. Dirk Kuyt set up Van Nistelrooy, who got past Buffon but lost his balance and the opportunity vanished.

However, the Dutch soon made amends when Van Nistelrooy netted from close range.

They doubled their lead five minutes later with a great breakaway goal. Van Bronkhorst made a crucial goalline clearance after a team-mate almost headed into his own net and, from that Italian attack, the Netherlands swept straight upfield to score their second goal.

Italy could have reduced the deficit shortly after but Di Natale's close-range volley was saved by Van der Sar.

Three minutes before the break, Buffon made a fine save to deny the Dutch their third of the evening. A beautiful ball by Sneijder found Van Nistelrooy, whose strike was parried by the goalkeeper.

Italy showed more determination after the re-start and had a good chance as Gianluca Zambrotta did well to get past Kuyt but his effort went wide. Toni then fired wide on the hour mark as Italy moved forward.

Just when Italy looked to have found their rhythm, the Dutch scored a stunning third. Van Bronckhorst latched onto Kuyt's cross, after another quickfire breakaway move, before heading past Buffon.

"I'm very happy and proud with this result," said van Basten. "To beat the world champions playing football to the last minute -- it was for us a very nice game and also a historical game. We have never beaten Italy by three goals.

"If you think we were without players like Arjen Robben and Ryan Babel, the players reacted in a wonderful way. They fought like a team and if the spirit is like it was tonight, with all the quality we have, we can have nice dreams."

Italian coach Roberto Donadoni said his men had to move on and look forward. "The game started badly for us and ended up worse but it is already history.

"We made mistakes and paid for them but now we have to look forward to the Romania game, which is going to be critical now."