(CNN) -- Austrian veteran Ivica Vastic levelled three minutes into injury time to earn the co-hosts a 1-1 against Poland in Group B in Vienna, after referee Howard Webb awarded them a controversial late penalty. 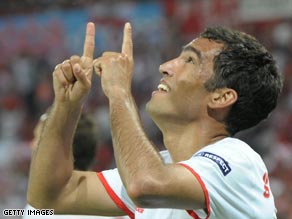 Roger Guerreiro celebrates Poland's goal in the 1-1 draw with co-hosts Austria in Vienna.

The 38-year-old crashed home his spot-kick after Webb ruled that Mariusz Lewandowski pulled on Sebastian Prodl's jersey in the area as Poland defended a free-kick.

Brazilian-born playmaker Roger Guerreiro's first goal for his country looked to have given Poland a vital win, even though he was clearly offside when scoring from close range.

Austria began strongly and should have gone ahead after failing to beat Poland goalkeeper Artur Boruc with three early clearcut opportunities.

Two were from Martin Harnik, who first latched onto a Marcin Wasilewski backpass and raced through, only for Boruc to deny him with an instinctive save using his feet.

Umit Korkmaz then weaved his way down the left before crossing for Harnik, with Boruc initially diving the wrong way but then again using his feet to save.

Poland's defense was looking fragile and was exposed again with a simple ball over the top -- with Boruc this time having to deny Christoph Leitgeb.

However, Poland grabbed their opener totally against the run of play on the half-hour mark. Euzebiusz Smolarek swung the ball over from left to right, Marek Saganowski checked back and his deflected shot fell into the path of Guerreiro, who tapped in from an offside position as the flag stayed down.

Jacek Krzynowek then had a couple of efforts from long range as Poland gathered momentum, which continued after the interval as well, with Smolarek having a 20-meter shot saved.

Austrian goalkeeper Jurgen Macho was again called into action in the 63rd minute when he denied Jacek Bak from close range after Guerreiro had found him unmarked with a cross to the far post. Krzynowek then had a powerful free-kick tipped over the bar by Macho when he tried his luck from 30 meters.

However, Vastic's last-gasp spot-kick ensures both these two sides, as well as Germany, still have a hope of joining Croatia in qualifying from Group B.