(CNN) -- Netherlands thrashed France 4-1 in the match of the tournament so far in Berne to secure their place in the quarterfinals by finishing top of Group C. 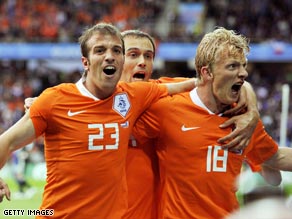 Dirk Kuyt (right) celebrates his opening goal as the Dutch destroyed France 4-1 in a superb match in Berne.

France still have a chance of qualifying, but they will need to beat Italy and hope Romania fail to defeat the Dutch in their final match.

For the second time in four days the rampant Dutch produced an attacking masterclass.

Dirk Kuyt opened the scoring and Robin van Persie, Arjen Robben and Wesley Sneijder added others after the break as Marco van Basten's in-form team sank the French in the same way they did world champions Italy here on Monday.

Les Bleus' consolation came through Thierry Henry on his return to the team, but even their revered defense could not handle the pace of their opponents' attacks.

France meet Italy on Tuesday but they both may be eliminated if Romania, who are second in the group, defeat the Netherlands on the same night.

The Dutch, meanwhile, will now have to cope with the tag of tournament favorites after disposing of the two World Cup finalists of 2006 in sensational style, scoring seven goals in the process.

It took just eight minutes for the Dutch to carry on where they left off against the Italians. Rafael van der Vaart sent in a corner in from the right and Kuyt beat Florent Malouda in the air to head home at the near post.

France coach Raymond Domenech, who had reverted to a 4-2-3-1 formation in bringing Patrice Evra, Sidney Govou and fit-again Henry back, would have been alarmed at the defending for the goal.

The Dutch were posing all sorts of problems early on, Sneijder firing just over in the 15th minute and then Kuyt poking a shot over the bar when free in the area after he pounced on a weak Lilian Thuram header.

However, France hit back and created a host of half-chances in the final 20 minutes of the half. Their first sight of goal came when Govou's near-post effort drew an excellent save from Edwin van der Sar.

Three more opportunities fell to the French in the space of a few minutes -- Malouda, Govou and Franck Ribery all bringing decent stops out of van der Sar with low drives.

Henry curled wide from 15 meters with the last opportunity of the half but at the start of the second period, he thought he had earned his side a penalty.

Govou's driven cross-shot was deflected into his path and the Barcelona striker's goalbound effort was blocked by the hand of Andre Ooijer, but German referee Herbert Fandel only gave a corner.

Henry had an immediate chance to exact his revenge but having been put clean through in the 53rd minute by Malouda's spectacular pass, the former Arsenal skipper sent his lob way over.

His miss was punished on the hour mark when two of the Netherlands' second-half substitutes, Robben and van Persie, combined to put the Dutch further ahead.

The goal originated from some sublime skills by Ruud van Nistelrooy on the touchline and his Real Madrid team-mate Robben took the ball on.

His perfect cross from the left found van Persie, whose volley crept over the line despite the best efforts of France goalkeeper Gregory Coupet.

Henry finally got his goal in the 70th minute when he glanced home a cross from the right from Willy Sagnol but, within seconds, Robben had restored the Netherlands' two-goal cushion.

The left-winger ran onto Sneijder's through-ball down the left channel, earned himself a bit of space against Thuram and drove home a powerful drive from a narrow angle into the roof of the net.

The impressive van Nistelrooy almost got himself on the scoresheet with seven minutes left with a looped header, but it was clawed out by Coupet.

It was left for Sneijder to add the cherry on the cake, with his superb curling shot from 20 meters out giving Coupet no chance.

"We were missing a lot of things, namely scoring," Domenech said. "We had more chances, we opened them up really well.

"But we were not efficient and that has been our recurring problem for a while now. You can't do much about that," he added.