(CNN) -- World champions Italy meet France Tuesday at Euro 2008 in a rematch of the 2006 World Cup final and the 2002 European Championship final -- but with very different consequences. 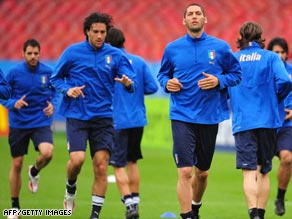 Italian players train Monday in Zurich ahead of their showdown with France.

With both sides still seeking their first win of the tournament, defeat for either in Zurich would mean certain elimination from Group C and an ignominious return home for the losing squad.

Should Romania beat the Netherlands -- who are expected to rest key players having already qualified for the quarterfinals -- in the group's other match in Berne both sides face elimination regardless of the result.

French coach Raymond Domenech and Italian counterpart Roberto Donadoni could also find their jobs on the line if their players fail to meet the expectations of two countries steeped in footballing success.

Going into the tournament, both the Azzurri and les Bleus -- who also met twice in qualifying -- had been considered among the favorites despite being placed in the toughest group. But shock defeats against the Dutch -- 3-0 and 4-1 respectively -- and failure to beat the defensively minded Romanians has left them scrambling for survival.

"Nobody would have thought that Italy-France would be a last-ditch match," said Italian goalkeeper Gianluigi Buffon, whose penalty save against Romania kept his country's slim hopes of making the last eight alive. "Before the European Championship, this was supposed to be the biggest match of the group."

Either Italy and France could advance if they win and Romania are beaten or held to a draw by the Dutch. Italy could also sneak through with a score draw if Romania lose. Who will win Tuesday's crunch match between France and Italy? Have your say

"We know what's at stake and we're ready to put our hearts and souls into it. For us, this is already a final," said Donadoni, who replaced Italy's World Cup-winning coach Marcello Lippi following Italy's win on penalties over France two years ago.

"Both sides will be extremely motivated and will try to win. It should be exciting. I can't wait for the game to start."

Admitting that both sides' fate was out of their own hands, Domenech recognized that France's qualification hopes hung by a thread with the Dutch unlikely to chase victory against a Romanian side they failed to beat in qualifying.

"They (the Netherlands) won't play with as much energy as they did against us and Italy," said Domenech following his side's defeat by injury. "It's very difficult to imagine Holland beating Romania now... We have to forget the other game completely. We still have a tiny chance but it will only happen if we win our game."

Domenech is still without veteran midfielder and captain Patrick Vieira of Italian champions Inter Milan, who has failed to feature in the tournament since picking up a thigh injury in training two weeks ago. Lyon striker Karim Benzema was tipped to return to the side after missing the game against the Netherlands.

Romanian coach Victor Piturca said he expected a tough match against the Netherlands despite the Dutch having already sealed their place in the last eight and Romania's victory over Marco van Basten's side in Bucharest during qualifying.

"We had some experienced players who knew Dutch football well and that helped us with our tactics against them in the qualifiers," said Piturca.

"However, that wasn't a good time for the Netherlands whereas right now, unfortunately for us, they are in extremely good form... We know the different scenarios but by the end of the game I hope we will have qualified because we deserve it."

The runners-up in Group C will face Spain, the winners of Group D, in Saturday's quarterfinal in Vienna. The Dutch's next opponents will be the determined by the result of Wednesday's clash between Russia and Sweden.