(CNN) -- Disappointed Dutch footballers were left licking their wounds on Sunday after their exit from the Euro 2008 Championships, which they had started so impressively. 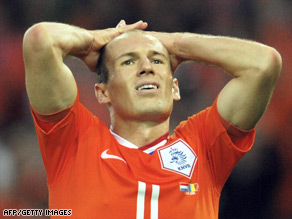 Robben missed the quarterfinal defeat because of a groin strain.

After their 3-1 extra-time defeat to Russia the Netherlands' former Chelsea winger Arjen Robben confessed that it would take the players a long time to get over the quarterfinal loss.

Robben, now with Real Madrid, missed the game because of a groin strain, and watched in dismay as his side bowed out after building up great expectations.

The Dutch had impressively despatched World Cup finalists France and Italy in their group games and looked to be the team in peak form.

But that counted for nothing against the hard-working Russians, well organized by their Dutch coach Guus Hiddink.

"It's amazing that a Dutch team with so much quality can get beaten. It's a difficult night for us. It's a sad story."

Midfielder Orlando Engelaar was also deflated. "We blew the European Championships. It's going to take a while for this to sink in," he said.

Veteran Giovanni van Bronckhorst said the Dutch simply did not have the power to cope with the Russians.

"They played really well and we didn't have the best of games," said the 33-year-old former Rangers and Arsenal player. "On the night Russia deserved to go through. I can't explain it. It's very hard.

"We had the feeling in this tournament that things were going well but in football you never know. I think Russia did very well."

Manchester United goalkeeper Edwin van der Sar was playing in his final European Championships and said afterwards: "I think we had a great tournament and unfortunately we couldn't get the level of play that we did in the first two games.

"You have one bad game in the knockout stages and you are out. That's the way it is.

"Russia are a very good side and they have a great chance now."

In the Vienna semifinal next Thursday, Russia will play the winners of Sunday's quarterfinal between Spain and Italy.