Who's hot and who's not at the Euros?

VIENNA, Austria (CNN) -- World Sport's Pedro Pinto casts an eye over the players who have impressed him at the Euros -- and those who have failed to shine. Which teams and players have caught your eye? Tell us below. 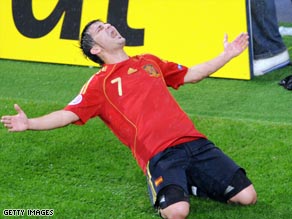 David Villa is currently top scorer at the Euros with four goals.

Four goals in two games for "El guaje" have made him the hottest property at the tournament. His speed, skill and movement have made him virtually unstoppable, and it helps when you have a strike partner like Fernando Torres. I expect him to move abroad after the tournament.

While everyone thought Miroslav Klose and Mario Gomez would be Germany's main threat, it has been Podolski hitting the target consistently for Joachim Loew's side. Can operate on the wing, but is most effective in the box where his powerful shots have been making the headlines.

Arsenal missed him last season and he has shown everyone why. His technique is exquisite and his finishing skills continue to improve. Started the tournament on the bench but made a strong case for a place in the first XI with a handful of fantastic displays and two good goals.

There have been many heroes in Turkey's unlikely run to the semifinals, but this talented midfielder certainly did his share. Has a small frame, but makes up for it with fantastic close control. One of the most creative players in the tournament and will be instrumental in the upcoming game against Germany, especially now that Nihat has been ruled out.

Russia have been transformed since he returned from suspension, and a lot of the credit has to go to the Zenit attacker. Not only is he fast and skillful, he also reads the game incredibly well and can pick out his colleagues with ease. Guus Hiddink knows football like few others, and he knows if Russia are going to make the final, he needs little Andrei to be in top form.

Great shot-stopper who excels in penalty shootouts but has been a liability in the Portuguese goal at times throughout the last four years. Cannot deal with crosses and fails to establish a physical presence in the penalty area. The way he was beaten in Germany's third goal in the quarterfinals was ludicrous.

Had an amazing season at Bayern Munich, hitting 39 goals, but looks completely out of sorts at this tournament. Slow and uninspired, Toni has missed a dozen chances that he would normally convert and failed to provide the attacking presence Italy desperately needed in their defeat on penalties by Spain.

Still has skill, is still a leader, but should not have started every match. He is slower and weaker than ever before (which is normal for a 36-year-old), and should have been used as a super-sub, never as a first choice. Markus Rosenberg or Johan Elmander would have been a better choice to partner Zlatan Ibrahimovich up front.

What was he thinking leaving out Philippe Mexes, Mathieu Flamini and David Trezeguet from his squad? And what was he thinking playing Lilian Thuram in defense? France looked old, tired and lacking any ideas in their matches in Group C. Of course it is the players' fault first and foremost, but Domenech could and should have done much better during the tournament. Playing Gomis before Anelka and Benzema? Please...