(CNN) -- There is fresh doubt over Klaas Jan Huntelaar's long-term future at Ajax after the Dutch international striker failed to agree a new contract with the club. 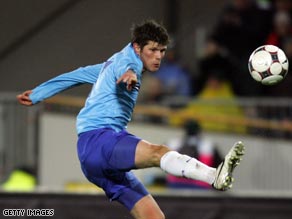 Huntelaar's failure to agree a new contract with Ajax could alert some of Europe's big clubs.

Huntelaar has been linked with a number of English Premier League clubs including Manchester United and Arsenal.

Ajax technical director Danny Blind admitted that contract talks had failed because Huntelaar wanted a release clause written into the deal but felt Ajax wanted to set the price too high.

"When you look at the Ajax salary structure he could get a huge deal," Blind said.

"But he doesn't want to see a release clause set at 25 million euros in his contract and we didn't want to go any lower."

However, Blind insists the breakdown in talks does not mean Huntelaar will leave the club any time soon.

"We don't want to see Klaas Jan leave us," he said. "The bar is high. We would like to keep our top scorer in Amsterdam. If he doesn't want to sign a new contract, he still has a deal for the next two years."

Blind also holds out hope that Huntelaar might reconsider. "The negotiations are stalled," he said. "We have agreed on the fact that Ajax will speak with all clubs that come in for Huntelaar.

"If the interested clubs don't want to pay what we we ask for, then we hope that we can start new talks with Klaas Jan again."