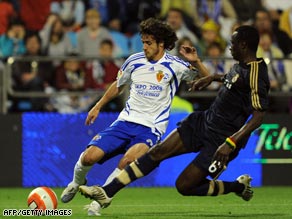 The Lisbon-based club have paid $10.3 million for Aimar, according to The Associated Press.

"I'm delighted because Benfica went out of their way to get me," Aimar said. "I know the coach and he knows me. I want to play regularly and win things here as Benfica are one of the biggest clubs in the world."

Aimar, who has played at two World Cup finals tournaments with Argentina, previously worked under Flores at Valencia from 2001 to 2006.

Flores took over at Benfica in May after the club failed to qualify for the Champions League, finishing fourth in the table under the guidance of caretaker coach Fernando Chalana.

British media had reported that Newcastle were hoping to seal a $12 million deal for Aimar ahead of the new Premier League season.

Aimar made his name with River Plate in his homeland before joining Valencia, who helped to win two Spanish league titles and the UEFA Cup in 2004. However, Flores sold him to Zaragoza for $19 million after the 2005-06 season.