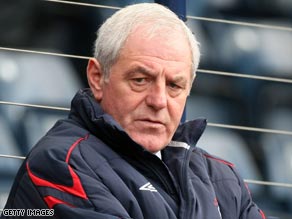 The first leg at Ibrox ended goalless last week but Rangers were firmly on course to reach the next stage when Kevin Thomson fired them in front after 33 minutes of the return.

Rangers were still in the driving seat on the away goals rule when Nerijus Radzius levelled two minutes before halftime.

Manager Walter Smith's side now have only a domestic agenda to look forward to with the Scottish Premier League campaign kicking off at the weekend.

Smith said: "It's a blow in every aspect, including the financial side and everything that comes with it.

"We just have to face it and get on with it. We have a job on our hands to pick everyone up.

"There was always a hope that we could pick ourselves up for this game and there was also a matter of pride of playing in Europe again.

"We enjoyed the run we had last season but we are not going to get one this season and that's a disappointment for us."

Smith reverted to the formation he favored in Europe last year, with the role of lone striker going to summer signing Kenny Miller.

Jean-Claude Darcheville was dropped to the bench following the first game in Glasgow, with Nacho Novo introduced to midfield and Christian Dailly playing just in front of the back four.

Lee McCulloch received the first booking for a foul on Rafael Ledesma who forced a decent save from goalkeeper Allan McGregor from the free-kick.

Thomson and Pascal Mendy were also added to the referee's book in quick succession as the tie grew more heated.

Rangers continued to push forward and a blunder from Mindaugas Baguzis almost gifted them the opener when his poor attempt at a headed pass-back to Kello trickled narrowly past the goalkeeper's left-hand post.

The breakthrough came when Thomson pounced on a Novo pass and slipped the ball through Kello's legs from a tight angle from about eight yards.

Kaunas could have restored parity when Ledesma's free-kick swept inches past an upright with McGregor helpless in the Rangers goal.

McGregor was well beaten on 43 minutes when Radzius struck a ferocious right-footed free-kick from 30 yards.

Kaunas knew they needed a second goal and Pilibaitis was not too far away after the restart before Marius Cinikas saw his powerful shot crash off the crossbar.

Rangers were under pressure again when Nukri Manchkava provided a great cross to the back post which was met by Adrian Mrowiec and McGregor did well to hold the close-range downward header.

With the final whistle only minutes away, McGregor was called into action again, this time to smother from Kaunas substitute Bojan Mamic.

But he was beaten when Pilibaitis snatched victory with a close-range header at the near post after Rangers failed to defend a corner.