Schalke edge to top of the Bundesliga

(CNN) -- Schalke 04 went top of the Bundesliga after a superb header from Germany defender Heiko Westermann gave them a 1-0 win at home to Bochum. 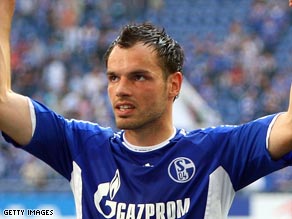 German international Westermann's header lifted Schalke to the top of the Bundesliga.

They took over top place from newly promoted Hoffenheim, who went down 5-2 away to Bayer Leverkusen..

The 25-year-old Westermann, a member of Germany's Euro 2008 squad, headed in a center from Brazilian Rafinha after 36 minutes.

Hoffenheim were surprise early leaders after beating Borussia Moenchengladbach and Energie Cottbus but they were brought down to earth at Leverkusen.

Germany striker Stefan Kiessling scored twice as Leverkusen, who led 3-1 at the break, asserted their superiority.

Hamburg went second in the table, level on seven points with Schalke, after coming from behind in Bielefeld to win 4-2.

Hamburg, who signed Germany defender Marcell Jansen for $11.7 million from Bayern Munich on Thursday, were 2-0 down after 37 minutes at Bielefeld

Bastian Reinhardt brought them level with strikes after 40 and 50 minutes and Croatia striker Ivica Olic gave them the lead 14 minutes later.

Czech Republic midfielder David Jarolim made it 4-2 after 77 minutes.

Bremen had only managed draws against Arminia Bielefeld and Schalke and at Moenchengladbach they trailed 3-0 with 19 minutes left.

Peru striker Claudio Pizarro scored 11 minutes from time and Diego's free kick made it 3-2 in the 89th minute but it was not enough.

Fatan Toski earned a point for Eintracht Frankfurt with an 84th minute goal in a 2-2 draw at Wolfsburg.

Neven Subotic sent Borussia Dortmund into third place, also on seven points, with the only goal at Energie Cottbus, after 45 minutes.

Defending champions Bayern Munich have their chance to pick up their first league win of the season on Sunday when they face Hertha Berlin at the Allianz Arena and Stuttgart host Hanover.