(CNN) -- Bayern Munich plummeted to ninth in the Bundesliga table as they crashed to a second consecutive league defeat with a 1-0 loss at Hanover on Saturday as Hamburg returned to the top. 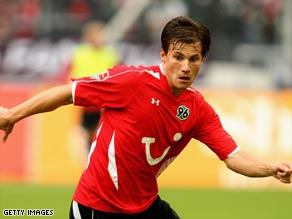 After being crushed 5-2 at home to Werder Bremen the week before,the reigning champions Bayern slumped again and goalkeeper Michael Rensing was wrong-footed when Szabolcs Huszti fired in a free kick after 23 minutes.

French international midfielder Franck Ribery came off the bench in the second-half, but it made little difference.

A header after 11 minutes by Croatian striker Mladen Petric gave Hamburg a 1-0 win over Borussia Moenchengladbach to put them top of the table after Schalke 04 lost on Friday night.

Werder Bremen midfielder Mesut Oezil scored an 81st minute winner as his side overcame Hoffenheim 5-4 in a remarkable encounter.

After putting five past Bayern, Werder carried on the good work and romped into a 4-2 lead by half-time.

Oezil put Bremen ahead on eight minutes and although Hoffenheim's Senegal striker Demba Ba equalized soon after, Bremen scored three goals before Hoffenheim's midfielder Sejad Salihovic curled in a free-kick on 36 minutes to make it 4-2 at the break.

But Bremen suffered a double blow early in the second half as Hoffenheim's Vedad Ibisevic converted a penalty to make it 4-3 just minute before Germany defender Per Mertesacker was shown a red card for hacking down the striker.

A header from Hoffenheim defender Marvin Compper on 71 minutes leveled the scores before Oezil hit his second of the game to clinch victory.

The home side fell 3-0 down but with ten minutes left they scored twice in as many minutes to provide an exciting climax.

Borussia Dortmund moved up to fifth with an impressive 3-0 win at home to VfB Stuttgart to seal their first win in five games.

Energie Cottbus picked up their first win of the season with a 1-0 victory over Hertha Berlin to lift themselves off the bottom of the table.