LONDON, England (CNN) -- Well, our recent list of top 'derby' matches certainly got you talking; most in disagreement with me it has to be said! 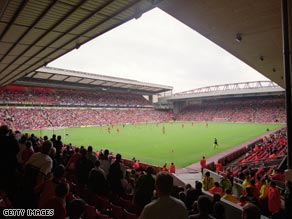 Though it is about to be replaced with a new stadium, the atmosphere at Anfield can't be beaten.

Having viewed football all over the world, I thought I'd publish my top 11 stadiums. I am basing my opinion on a variety of different variables; tradition, atmosphere, beauty etc.

Do you agree? Have we left off the best football ground? Let us know in the Sound Off box below.

The stadium was first built over 120 years ago and, quite frankly, it shows. Anfield is looking old and tired and the club is actively seeking a new home, yet it simply has to be in the list for atmosphere alone. The sound of 45,000 Liverpool fans simultaneously singing "You'll Never Walk Alone" is spine-tingling -- especially on European nights. The Kop is an awesome stand and as the players come down the tunnel to the pitch, a sign above them says "This is Anfield"...That says it all.

See a photo gallery of our First 11 stadiums »

Borussia Dortmund are the best supported single-city club in Europe and the Sudtribune is Europe's largest standing terrace, packed with more than 25,000 of Dortmund's most vocal supporters on Bundesliga match days. With a capacity of 80,000, this is a real temple of football, close, intimidating and passionate. Just imagine what it would be like if Dortmund returned to being the force in German football they once were.

Now used only for Welsh international home fixtures, the Millennium stadium proved a revelation as a temporary home for English finals while Wembley was being refurbished, so much so that many people -- myself included -- felt that it was the perfect stage for such major matches as the FA Cup final. A retractable roof meant the atmosphere could be enclosed within the stadium, and its position in the heart of Cardiff made it very accessible. Sadly missed by many Englishmen.

The home of the Mexican national team and to club side America, the Azteca really is an iconic football arena. It is the only stadium to host two World Cup finals, in 1970 and 1986 and has played host to undoubtedly the two greatest goals in football history; Carlos Alberto (Brazil v Italy in 1970) and Diego Maradona (Argentina v England in 1986). With a capacity of 105,000, it is the fifth-largest stadium in the world. If a stadium could write an autobiography -- the Azteca would wipe the floor with everyone else!

The home of Boca Juniors, La Bombonera (the Chocolate Box) gets its name from its rectangular shape. Despite a capacity of only 57,000, the atmosphere in the ground is unique and the vibrating caused when fans start to jump up and down in rhythm, is believed to intimidate many opposition teams. As well as the atmosphere, the murals that line the interior and exterior of the stadium add a special touch that is rarely matched elsewhere.

Has to be included for history purposes alone. Unbelievably, just shy of 200,000 people packed into the ground to see host nation Brazil lose out to Uruguay in the 1950 World Cup finals and although modernization has meant a marked reduction in the capacity, a total of 95,000 makes it the 12th biggest arena in the world. Flamengo and Fluminese share the stadium but in six years time the eyes of the world will be back on the famous old ground when it joins the Azteca in Mexico as the second stadium to host two World Cup finals.

The biggest club ground in England with a capacity of over 76,000, Old Trafford is known as "The Theatre of Dreams" for good reason. Such has been United's domination since the inception of the Premier League, that sour-faced rivals claim many Old Trafford supporters are just there for the "day out" and don't actually come from Manchester. Who cares? The ground is always full and the roar from the Stretford End is worth the admission money alone.

With a capacity of just over 98,000, the Nou Camp -- which simply means "new field" in Catalan -- is the largest stadium in Europe and an absolute must to visit for any football fan. Only 50 years old, the stadium stands like a shining beacon, dominating its surroundings. Despite its size, the high over-hanging stands somehow still manage to give an enclosed, intimidating feeling, although the locals' displeasure at a bad display (cue the waving of white hankies) can give the stadium an eerie feeling when things are not going Barca's way.

The San Siro, or to give it its proper name, the Stadio Giuseppe Meazza, is a work of art and the only Italian stadium to make my list because it doesn't have an athletics track and that gives the feeling of a real football venue. The stadium has played host to both Milan and Inter since 1947, previously Milan had been sole tenants, with the 11 towers that adorn the outside giving it a unique appearance.

I make no excuses for including the tiny Madrigal stadium, because of the atmosphere generated within and outside it. The ground only holds 25,000, but as the town itself has a population of under 50,000, it means half its inhabitants are watching the action when the stadium is full. The tiny surrounding streets occasionally play host to a giant yellow submarine -- the team's nickname -- which is paraded before kick-off and the general feeling is one of friendliness mixed with steely determination. I guarantee that no ground this size anywhere in the world makes more noise, a reason, I'm sure, why the club continues to punch above its weight in La Liga.

A real work of beauty. The home of Benfica and the Portuguese national side was entirely rebuilt for the Euro 2004 finals -- and what a job the architects did. Known as 'The Cathedral' by supporters and locals, the stadium's capacity, once a remarkable 120,000, was nearly halved, but what it lost in terms of spectators, it made up for in a stunning, modern arena. Bedecked in the red and white color of Benfica, the stunning red arches over the roof and pretty surroundings, makes this one of the most beautiful stadiums in the world.