(CNN) -- Jose Mourinho's reign at Inter Milan suffered another setback on Wednesday night as the defending Italian champions were held 0-0 away to Fiorentina. 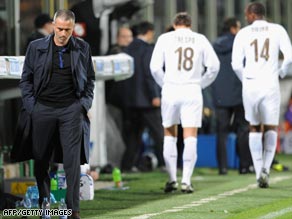 Jose Mourinho, left, saw his Inter side held for a third time in nine league outings since taking charge.

Inter, held to a goalless draw by 10-man Genoa on Sunday, now trail Udinese and Napoli by two points after nine rounds.

Udinese remained on top on goal difference following a 2-0 victory at Catania, while Napoli also moved onto 20 points with a 3-0 home drubbing of bottom club Reggina.

AC Milan went a point above their city rivals with a 2-1 victory at home to Siena as veteran striker Filippo Inzaghi scored once and earned a penalty that Kaka converted.

Inzaghi netted the opener in the 31st minute from a pass by midfielder Gennaro Gattuso but Simone Vergassola leveled on 54 before Brazil playmaker Kaka scored from the spot 11 minutes later to extend Carlo Ancelotti's team's unbeaten Serie A run to seven matches.

The closest Inter came to scoring was when Amantino Mancini hit the crossbar five minutes in, as Fiorentina held onto fifth place a point behind the visitors.

Mourinho dropped forwards Adriano and Julio Ricardo Cruz for punishment after the Genoa game, and teamed Zlatan Ibrahimovic with Victor Obinna and Amantino Mancini in attack instead.

Pazzini had appeared to be denied a penalty in the first half when defender Nicolas Burdisso seemed to bring him down.

"I'm going home content tonight," Mourinho said. "I can't be satisfied with the result, but my squad played tough, and that's what counts. We haven't won the last two games, but we haven't lost either. I think it's only fair to give some merit to Genoa, to Fiorentina, for how they played us."

Argentine forward German Denis racked a hat-trick -- with two goals in the first 16 minutes -- as Napoli defeated Reggina 3-0 to celebrate the reopening of the curves at San Paolo Stadium.

"Everyone should fear Napoli for the way we're playing right now," Napoli coach Edy Reja said. "If we continue performing at this level anything is possible.

"I said at the start that (Denis) was going to be a key player for Napoli, considering the 37 goals he scored in Argentina. But today (Marek) Hamsik was really extraordinary, providing two assists like only he knows how."

Juventus continued to climb the table, beating struggling Bologna 2-1 for a second straight victory after a month without a win thanks to a goal in each half from veteran Czech midfielder Pavel Nedved.

Claudio Ranieri's side are now ninth on goal difference behind Catania.

The AS Roma-Sampdoria game was stopped after six minutes with the score 0-0 due to heavy rain, and will be replayed later.

In Wednesday's other matches, Lazio won 2-1 at Chievo Verona to claim seventh place -- a point behind Fiorentina, and above Genoa on goal difference.

Genoa won 2-1 at home to Cagliari, Palermo drew 1-1 at Lecce and Torino moved out of the bottom three with a 2-1 victory against Atalanta.