LONDON, England (CNN) -- He is hailed as a god in his native Argentina, has been a vital part of the country's culture since the mid-70s and is largely considered to be one of the greatest footballers of all time. 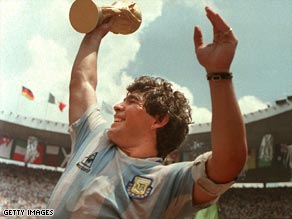 Now, 11 years since retiring from playing, Diego Maradona is making a triumphant return to the sport as the Argentine national coach.

However, his checkered past has made Maradona something of a surprise choice. The 48-year-old has regularly courted controversy -- not with-standing his well-publicized drug-addiction.

His talent has never been in doubt, though, and his performances on a domestic and world stage are the stuff of legend.

Since beginning his career as a 15-year-old with Argentinos Juniors, Maradona has attracted legions of fans.

At club level, Maradona won the Argentine title with Boca Juniors, prompting a high-profile move to European football, where he won the Copa del Rey with Barcelona.

But it was at Napoli that his presence was really felt. When he arrived, the club were not considered title contenders in Serie A, but with Maradona's arrival, the southern side were transformed into one of Italian football's dominant forces.

During his time with Napoli, the club won the Scudetto twice, the Coppa Italia and the UEFA Cup.

And his status as a national hero was further cemented during his performances in the 1982, 1986 and 1990 World Cups.

Though he briefly shone in his World Cup debut in 1982, before an act of petulance saw him sent off against Brazil, it was the 1986 tournament in Mexico that Maradona made his own.

Maradona took the finals by the scruff of the neck, scoring five times, including one of the greatest goals ever scored in the 2-1 quarterfinal win over England -- as well as creating more controversy with his infamous "hand of God" goal in the same match.

But his iconic status as a footballer is only outshone by his wild private life.

His time at Napoli came to an abrupt end after he was found in possession of cocaine, and his last World Cup as a player, USA 1994, was beset with controversy, as he was sent home early after failing a drugs test.

And the Maradona soap opera has continued after his retirement.

Since quitting in 1997, he has spent a great deal of time in drug rehabilitation clinics in Cuba and Switzerland, where he combated his addiction to cocaine.

He has also been subject to dramatic weight gain, struggling with obesity and eventually undergoing gastric bypass surgery to prevent any further fluctuations in his size.

In recent years he has also been treated for the affects of alcohol abuse and his health has been a cause for much concern among the world's sports media.

He has been hit by hepatitis at least twice and in 2004 he was rushed to hospital after a heart attack, following a cocaine overdose.

And at times he has even seemed mentally unstable -- in a famous incident the one time chat show fired a gun at media waiting outside his house, hitting and injuring four.

But, despite the negative stories that have circulated about Maradona, he is still regarded as a national hero in Argentina.

No-one can doubt his skills as a player, but it has certainly raised a few eyebrows that he has been put in charge of an Argentina team that is struggling to hold its own in the World Cup qualifiers.

Whether he can strategize like a professional manager is yet to be seen, but simply by being Maradona, he will prove to be a great figurehead for the team.