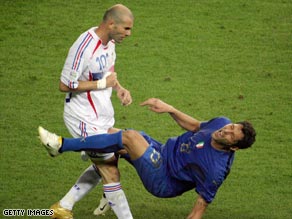 But what about those times when something out of the ordinary happens on the pitch, something astonishing that leaves you rubbing your eyes?

Below, are the 11 most shocking moments from football matches from the last 25 years.

Do you agree with our list? Which ones have we missed? Let us know in the Sound Off box below.

Bad blood between Barca and Athletic Bilbao continued into the Copa del Rey final and when the sides met at the Nou Camp in 1984, Maradona exacted his revenge, jump-kicking anyone in a red-and-white shirt. Players from both sides waded in and fists and boots flew amid scenes best described as ugly.

2. Zidane headbutts Materazzi, 2006
Zinedine Zidane, the world's greatest footballer, was hoping for a glorious swansong and he had put France ahead against Italy in the 2006 World Cup final. Italy had drawn level through Marco Materazzi and penalties were on the cards when Materazzi, himself never far from controversy, wound the impetuous Zidane up with a remark about the bald playmaker's family. Read more about football at Football Fanzone

Zidane's response, to turn around and headbutt the defender's chest, was astonishing. A commotion followed and eventually Zidane received his marching orders. It was the final, unforeseeable act of a brilliant career.

3. Cantona's kung-fu kick, 1995
Manchester United forward Eric Cantona had a reputation of being highly strung and when he kicked Crystal Palace's Richard Shaw, a red card was inevitable. As he trudged down the Selhurst Park touchline, Palace fan Matthew Simmons shouted abuse at the Frenchman and the red mist descended.

Cantona flew feet first into the crowd at Simmons, then got up to aim punches at the fan as shocked supporters looked on. Eventually, Cantona was pulled away. He was ordered to serve 130 hours' community service and banned from football for nine months. Cantona later explained to a bemused press conference: "When the seagulls follow the trawler, it's because they think sardines will be thrown in to the sea."

4. Schumacher knocks out Battiston, 1982
Harald Schumacher showed his uncompromising side in football's worst-ever challenge. West Germany were playing France for a place in the 1982 World Cup final when Patrick Battiston was sent clear on Schumacher's goal. Do you agree with our selection? Let us know.

The defender's touch had taken the ball past the on-rushing goalkeeper, but Schumacher was not interested in playing the ball. Instead he jumped side-on into Battiston, flattening him. The out-cold Frenchman suffered three cracked ribs, damaged his vertebrae and lost three teeth, while Schumacher was not even booked. To add insult to injury, West Germany went on to win the match.

5. Di Canio pushes the referee over, 1998
Paulo Di Canio was a wonderfully gifted forward, capable of the sublime and, judging by this incident, the ridiculous too. Playing for Sheffield Wednesday against Arsenal at Hillsborough, the Italian had been shown a red card by referee Paul Alcock.

Blood boiling, Di Canio strolled over to Alcock and pushed him, sending the referee stumbling back, theatrically, before falling over. Di Canio was fined, banned for 11 matches and did not play for Wednesday again.

6. Dyer and Bowyer come to blows, 2005
Fisticuffs, or "handbags" as they're often described, between opposing players are not uncommon -- but a fight between two players from the same side is rare. So when Kieron Dyer and Lee Bowyer were caught tearing the Newcastle shirt from each other's backs, the incident raised more than a few eyebrows.

Bowyer, always a fiery character, threw the first punch, Dyer reacted and they were both sent off. The pair were later reunited at West Ham United, where their time on the pitch together has been restricted by injury.

7. Rivaldo's theatrics, 2002
Rivaldo was a brilliant player, perhaps as good a forward as Brazil has ever produced, but his reputation will forever be tarnished by this blatant piece of play-acting. With the ball out of play during the 2002 World Cup group game between Brazil and Turkey, Hakan Unsal kicked the ball at Rivaldo from a distance, which ricocheted off his thigh.

Rivaldo then threw himself to the floor, rolling around and holding his face. His shameful gamesmanship got Unsal a second yellow card and, following a video review, Rivaldo was handed a small fine. The world's opprobrium carried greater weight.

8. Di Canio's fascist salute, 2005
The controversy in Paulo Di Canio's career did not end after he left England. He returned to Italy to play for home-town team, Lazio and after a 3-1 win over city rivals Roma, Di Canio was photographed making a straight-armed "Roman salute," the kind associated with Italy's former fascist leader, Benito Mussolini.

The gesture was aimed at Lazio fans, a minority of whom hold far-right views. Di Canio was banned for a game and fined a minimal amount but claimed there was no political motivation behind his celebration.

9. Fowler "eats the grass," 1999
Childhood Everton fan Robbie Fowler was an obvious target for Toffees fans once he'd started banging the goals in for rivals Liverpool. And it was during a Merseyside derby that Fowler felt like giving something back.

Everton fans had accused Fowler of being a drug taker and so after putting away a penalty, the striker celebrated by pretending to "snort" the white painted lines of the pitch markings in front of the away end. Liverpool manager Gerard Houllier said afterwards it had been a jokey goal celebration where Fowler was pretending to be a cow.

10. Gazza plays the flute, 1998
Paul Gascoigne's mental problems were not known during his 1990s heyday, with England manager Bobby Robson diagnosing him merely,"daft as a brush." But there was no excusing the midfielder's actions during an always-heated Glasgow derby at Celtic Park.

The Rangers midfielder pretended to play a flute, a symbol of the Protestant Orange Order marchers, in front of the traditionally Catholic Celtic fans. Gascoigne later claimed to be unaware of its significance, but his life was threatened afterwards.

11. Foe dies on the pitch, 2003
Marc-Vivien Foe made his name in England and France as an athletic, ball-winning central midfielder. In short, a picture of health. So it was perhaps the ultimate shock when playing in the semi-final of the Confederations Cup for Cameroon against Colombia, Foe collapsed in the middle of the pitch, with no one near him.

Efforts to resuscitate him on the field failed and he died shortly after arriving at the medical centre at the stadium in Lyon. An autopsy revealed the 28-year-old's death was heart-related.