(CNN) -- Liverpool stayed top of the English Premier League after the Boxing Day program with a 3-0 win over Bolton as Robbie Keane wrapped up victory with two second half goals. 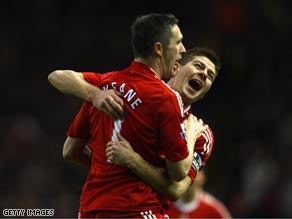 Keane is congratuled by Gerrard after the pair combined for Liverpool's second.

Earlier wins for champions Manchester United and Chelsea put the pressure on Rafa Benitez's men but they responded with a superb performance at Anfield.

It leaves them on 42 points from 19 games, one clear of Chelsea at the halfway stage of the season.

United are seven points adrift but have two games in hand.

Aston Villa are fourth after coming from two goals down to earn a 2-2 home draw with Arsenal in the late kick off.

Villa struck the woodwork three times before Denilson struck Arsenal's opener early in the second half.

Robin van Persie then hit the post in search of a third before Gareth Barry pulled a goal back from the penalty spot.

Defender Zat Knight completed the remarkable comeback in injury time as he drove home the equalizer from 12 meters.

"I thought we were sensational in the first half but, as can happen, they scored and the goal definitely knocked the stuffing out of us," he told Sky Sports.

"However, we returned and battled. It's very easy to say when we get a late equalizer but, even if we'd been beaten, I would have said that I thought the character shone out there. I felt it was unbelievably strong."

Summer signing Albert Riera put Liverpool ahead in the 26th minute with Keane scoring his double in the space of five minutes early in the second half.

After his crucial equalizer at Arsenal in Liverpool's previous game, Keane again showed the quality which made him a big-money summer acquisition from Tottenham Hotspur.

Liverpool captain Gerrard also played a key role in making it 2-0, the England midfielder's pass to Keane allowing the Republic of Ireland international to run onto the ball and lash it past Jussi Jaaskelainen on 53 minutes.

Keane then took his personal tally to three goals in two games when he turned in a Yossi Benayoun cross.

The inspirational Gerrard also set up Riera as his corner was headed home by the Spaniard midway through the opening half.

Victory was a huge relief for Liverpool who had drawn four of their last five league games, but in Lancashire neighbors Bolton found ideal opponents who had not won at Anfield since 1954.