(CNN) -- Manchester United stepped up their title challenge with a 1-0 win over Stoke City as Carlos Tevez scored the only goal of the match with just seven minutes remaining at the Britannia Stadium on Boxing Day. 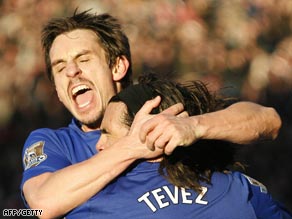 Fresh from the World Club championship success in Japan, United were forced to battle hard for their three points by promoted Stoke whose challenge was undermined by Andy Wilkinson's sending off in the 72nd minute.

Wikinson was dismissed for his second yellow card for a challenge on Cristiano Ronaldo and it proved a crucial moment.

With United pouring forward, Gary Neville delivered the ball into the area and an immaculate touch by substitute Dimitar Berbatov set up Tevez at the far post.

It was the Argentine star's second Premier League goal of the season and lifted champions United to 35 points from 17 rounds.

United, who beat Quito of Ecuador to the world club title last Sunday, were not at their best and created few chances.

Stoke goalkeeper Thomas Soerensen saved a long-range shot by Paul Scholes and Berbatov headed over the bar, but the home side also troubled United with their direct approach.

United manager Alex Ferguson was delighted with the three points which keeps his team in touch with pacesetting Liverpool and Chelsea.

"If we could get to New Year's Day a couple of points adrift of the leaders we would be very happy," Ferguson told Sky Sports.

"We expect to kick on. We'll give ourselves a great chance if we get into that position."

United's local rivals Manchester City later scored an emphatic 5-1 win over Hull City which lifted them out of an improbable relegation place and eased the pressure on manager Mark Hughes.

City tore into Hull, sixth at the start of the day, from the first whistle with Brazilian ace Robinho scoring twice and young Ecuador forward Felipe Caicedo also grabbing a double at Eastlands.

Hull manager Phil Brown made his team sit on the pitch for much of the interval to give them a public dressing down and despite pulling a goal back in the second half conceded again as Stephen Ireland scored a deserved fifth.

Meanwhile Tottenham were held 0-0 by Fulham at White Hart Lane, the fourth straight goalless away draw for the visitors.

Relegation battlers Sunderland and Blackburn drew 0-0 in a drab match at the Stadium of Light, while Wigan beat Newcastle 2-1 and improving Everton won 1-0 at Middlesbrough to move into the top six.