Drogba on target as Chelsea ease to win

(CNN) -- Chelsea stayed in second place in the English Premier League with a 2-0 win over bottom club West Bromwich Albion in an early kick off on Boxing Day. 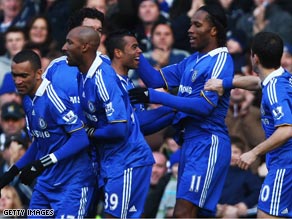 Drogba's early goal set Chelsea on their way to a comfortable three points.

Luiz Felipe Scolari paired Didier Drogba and Nicolas Anelka in his starting lineup for the first time this season and it reaped immediate award.

Midfield star Frank Lampard then picked up on Ashley Cole's deflected cross to chip over Carson and double Chelsea's lead on the stroke of half time.

Chelsea continued to press in the second half and Carson had to be at his best to keep out Drogba just after the hour.

West Brom created few chances and Paul Robinson saw his late strike blocked by Alex before Anelka nearly made it three in the dying moments.

It was Chelsea's first home league win in almost two months, lifting them to 41 points after 19 games, one behind Liverpool who beat Bolton 3-0 in a later match on Friday.

Chelsea assistant manager Ray Wilkins said his team were delighted to have Drogba back.

"It is always nice to score early on and it was a classic center forward's goal: a powerful header," he told Sky Sports News.

"It is lovely to have Didier fully fit although we took him off in the second half because he got a kick on the thigh. He is an exceptional center forward."