Where is Portugal's Tiger?

LONDON, England (CNN) -- It's a question that I have asked myself for a long time. Why can't Portugal produce a top golfer? 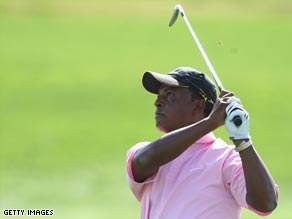 Antonio Sobrinho was the only Portuguese golfer to make the cut at the recent Portugal Masters.

The weather is great, courses are popping up all over the country, and still, they don't have a single player in the top 400 of the world rankings.

On the surface, it might not make sense, but if you dig a little a deeper, like I had a chance to do during a recent Living Golf report in the Algarve, there are plenty of reasons why golf isn't taking off among the locals.

The most shocking statistic of all is that in the whole country there is not a single public golf course.

This means if you want to play, you have to become a member of a club or pay something in the region of 100 Euros ($137) for a round of golf.

Considering the minimum salary in Portugal is under 400 Euros a month, it becomes clear the vast majority of Portuguese people simply can't afford it.

This means most of the people out on golf courses in Portugal are foreign, and while this is great for tourism, it's doing nothing to help the grass roots of the game in the country.

Another issue is that the sport is seen as elitist and is not part of the nation's sporting culture.

There is great passion among Portugal's youngsters, as there is in many European countries, for football. And though people play other sports, and you can get lessons in sports like golf, there is an almost complete lack of interest -- no-one really talks about golf.

What the country really needs is a golfing superstar to kick-start a revolution and inspire the new generation -- a Cristiano Ronaldo of golf.

The Portuguese Golf Federation says the tide is turning and they claim they are doing their best to invest in young amateur players.

They also have allies with some of the private investors who have built golf courses in Portugal sponsoring some of the nation's top prospects. Oceanico is an example of this, with the company that has built seven courses in the Algarve backing three of Portugal's five professionals.

The more organizations that invest in up-and-coming golfers like this, the more chance Portugal will have in producing the next Tiger Woods.

There could yet be hope for golf in the country, but it will take more investment, more time and a figure to unite an otherwise football obsessed country around a relatively neglected sport.