By Pete Sorel-Cameron
For CNN

LONDON, England (CNN) -- Since turning pro in 1999 at the tender age of 19 Sergio Garcia has had the billing of 'the next big thing.' 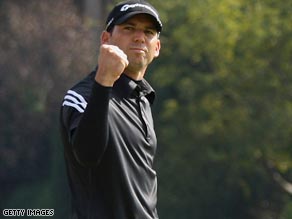 Sergio Garcia gives an air punch at the HSBC Champions in Shanghai this November.

However -- aside from a glowing Ryder Cup record -- he has consistently failed to find the form people have expected from him.

Of the 38 Majors he's contested, he hasn't returned a single win. The closest he's come to the top spot is second place, on three occasions.

Garcia made a promising start to the new season this month with a win at the HSBC Champions in Shanghai. The event propelled him to number two in the world rankings, behind the injured Tiger Woods, effectively making him the highest ranked golfer playing at the moment.

Speaking after the event in Shanghai, Garcia said he was thrilled with the result: "Right after I won The Players, I thought I could get to number three. I thought number two was still quite difficult, but it's awesome, it's great."

As well as the result putting him close to the top spot in the world rankings, it also makes the 28-year-old the leader of the inaugural Race to Dubai, this season's big talking point on the European Tour.

He told Living Golf how he sees this new event impacting the Tour, and his own, personal golf schedule: "It's going to be huge, not only for European golf and for the European Tour, but for golf itself; we're all looking forward to it."

And as the Tour continues he is certainly one of the favorites to feature heavily in the top end of the Race.

But, he still has some obstacles to overcome. Until now Garcia has been a typical representative of his generation of golfers, living and playing in the shadow of the ever-dominant Tiger Woods.

"When we talk about Tiger, we're looking at the kind of player that you don't see very often in history. There's very few like him, if there's ever been one like him," Garcia said.

The absence of the world's best player from the tour -- however temporary -- doesn't give Garcia a free run at a Majors title.

This year, Garcia lost playoffs to run second place to Vijay Singh at The Barclays and to Camilo Villegas at the Tour Championship.

Padraig Harrington also relegated Garcia to runner up in this year's U.S. PGA Championship. It was an unwelcome reminder of Harrington's success in the 2007 Open Championship, when the Irishman came from behind to beat his Spanish rival in a playoff.

Relatively new names on the course are also threatening to disrupt Garcia's plans to secure a Major title.

Twenty-six year old Camilo Villegas climbed to number seven in the world rankings this year after successive wins at the BMW Championship and the Tour Championship. And the junior star of this year's U.S. Ryder Cup team Anthony Kim's career is also on the up.

Garcia though is unfazed by the competition. He told Living Golf he's on track to achieve that elusive Masters win.

"If I play the way I'm playing, I probably can," he said.

All About Golf • Sergio Garcia