(CNN) -- Spanish legend Severiano Ballesteros has left intensive care after his fourth operation, the Madrid hospital at which he is being treated have confirmed. 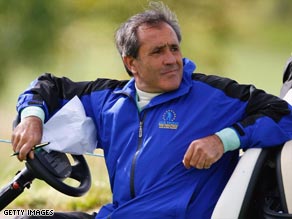 Ballesteros has undergone four operations since collapsing at Madrid airport on October 5.

The five-time major winner underwent further surgery on Tuesday for the placement of a cephalorachidian fluid VP shunt.

At the same time, the surgical team treating the 51-year-old performed a cranioplasty to repair a bone defect.

He remained in intensive care overnight being moved back onto the ward on Wednesday.

Ballesteros was diagnosed with a brain tumour after losing consciousness at Madrid Airport on October 5. He underwent a first operation on October 14, when a sizable part of the tumor was taken out.

Ballesteros then underwent an intricate six-and-a-half hour operation on October 24 to remove what remained of the tumor and reduce the swelling.