(CNN) -- Spanish golfing legend Severiano Ballesteros was discharged from hospital on Tuesday, as he continued his recovery from a brain tumor. 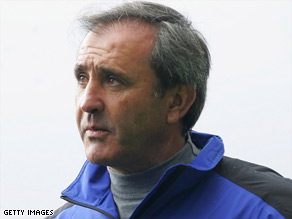 Ballesteros has called the situation the "hardest challenge of my life."

Ballesteros, 51, posted a message on his personal Web site to thank the doctors at Madrid's Universitario La Paz hospital for his treatment.

"Thanks to them I will be able to play the mulligan of my life, which I expect to enjoy at my best," Ballesteros said.

"There is a long recovery time ahead and I shall keep fighting with patience and determination against the brain tumor that was detected at the beginning of October."

Ballesteros was diagnosed with a brain tumor after losing consciousness at Madrid Airport on October 5. He underwent a first operation on October 14, when a sizable part of the tumor was taken out.

Ballesteros then underwent an intricate six-and-a-half hour operation on October 24 to remove what remained of the tumor and reduce the swelling.

Further procedures to have a valve inserted to drain fluid from his brain and a cranioplasty to repair a bone defect have preceded his release from hospital.

He will continue to be treated as an outpatient having been released from intensive care for the first time last Wednesday.

"Occasionally I was a rebel patient and therefore I ask them to forgive me and thank everyone for all the cares received," Ballesteros added.

He helped beat the United States in the 1985 Ryder Cup to begin two decades of dominance and also captained Europe to victory in 1997 at Valderrama in Spain.

All About Seve Ballesteros • Golf