Are we spell-bound by e-books?

(CNN) -- Imagine a magic scroll, one that contains a myriad of stories and tells you a different one every night. One that fetches you the morning news, generates customized crossword-puzzles, keeps an eye on your favorite authors and an ear on the local grapevine. Imagine a living, breathing kiosk of brain-candy and a library of literature that's easy to read and rolls right up into the palm of your hand. 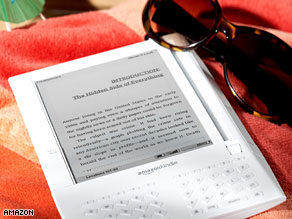 The Kindle belongs to the new generation of e-book reading devices that use Electronic Paper Display.

Before jumping to the K-word, keep in mind the magic. Because while the concept is there, the Kindle is not -- yet. But as far as wireless dedicated e-book reading devices go, it's a promising start.

"Books are the last bastion of analog," Amazon founder Jeff Bezos declared a few days before the Kindle's release on November 19, 2007.

Indeed, sensations such as cracking open a brand-new hardcover or fondling the dog-eared corners of a favorite paperback in a second-hand bookshop die hard. But then, so do trees.

In response to the lingering fetish for the printed page, Bezos sighed: "I'm sure people loved their horses too, but you're not going to keep riding a horse to work."

Amazon's Kindle sold out on the day of its release in less than six hours.

Given its native pairing with Amazon.com on the mainstream market, the Kindle has not resisted comparison with Apple iTunes and the now ubiquitous iPod.

Asked at the Macworld Expo in January 2008 what he thought of the Kindle, Apple founder Steve Jobs scornfully replied: "It doesn't matter how good or bad the product is; the fact is that people don't read anymore."

"When you're reading a book," says Kindle spokesman Andrew Herdener, "you forget that it's a container made of up paper, glue, stitching, cardboard, etc -- You get lost in the author's world, and the book disappears.

"We tried to replicate this same feature -- to make Kindle disappear. That's why we used e-Ink and made it wireless, so you don't even notice it's a device."

The Kindle (as in the sparkling ignition of knowledge) was conceived with overtly bookish analogies, from its paperback size and electronic "paper" display to the librarian-monikered Whispernet (based on mobile-phone carrier Sprint's EVDO broadband service) used to beam content into the box.

Like other dedicated e-reader devices, the Kindle focuses on optimizing text display (featuring adjustable font size) and managing contextual references, such as a built-in dictionary, live Wikipedia access and an "experimental" browser that reads only text -- presumably, for less audio-visual distraction.

You can pounce on newly purchased e-books in less than a minute, and subscribe to newspapers, magazines and blogs (in 4-level grayscale), which are automatically refreshed, as long as the internal modem is turned on. You can also send it your own PDF, text or image documents, and even audio files, to "kindle" and read.

But its free-access, unlimited Whispernet capability is what distinguishes the much-hyped Kindle from other e-readers currently available on the market -- which rely on either synching to a computer or WiFi access to the Internet -- making it a standalone, purpose-built, almost magic book.

The Kindle itself isn't quite magic for three main reasons -- two of which apply to any e-reading device, and all of which can be resolved over time.

Firstly, because of its exclusive partnership with Sprint, it only works to its full wireless potential within the U.S., thus alienating would-be fans in the rest of the world.

Secondly, because these devices focus on text, readers are limited to text-only, grayscale versions of otherwise colorful and lively newspaper, magazine and blog pages that are accessible for free on the Web.

Thirdly, and most significantly, there still aren't enough e-books available to meet the demand. And unlike with MP3s, you can't easily rip your own books into a readable e-format.

Amazon may boast the largest proprietary e-library with 126,994 Kindle books listed on its Web site, but one of the outstanding complaints from e-readers who have purchased any dedicated device is not finding the e-books they want.

Fortunately, some publishers are listening.

Just last week, Simon & Schuster announced 5,000 new titles to be made available for the Kindle in 2008, primarily adult and children's fiction and nonfiction. Apparently, e-publishing pays.

It has also launched digital initiatives such as iFodors, making travel information and maps downloadable for PDA, online pay-per-page-view and individual chapter sales.

Of course, e-publishing also saves trees -- not to mention the time and costs of manufacturing paper, printing, shipping and handling.

Science-fiction author Cory Doctorow's "Down and Out in the Magic Kingdom" was published simultaneously in print by Tor and electronically on the Internet in 2003. Three years and six printings later, more than 700,000 copies of the book had been downloaded from his site.

"The book's been translated into more languages than I can keep track of, key concepts from it have been adopted for software projects, and there are two competing fan audio adaptations online," Doctorow writes in Forbes.

"Most people who download the book don't end up buying it, but they wouldn't have bought it in any event, so I haven't lost any sales, I've just won an audience. (...) In an age of online friendship, e-books trump dead trees for word-of-mouth."

And if any doubts still arise about free online access spurring paper book sales, just ask J.K. Rowling how successful she thinks the print version of the Harry Potter Lexicon will be.

Long before the success of "Brokeback Mountain," Fiction Pulitzer Prize winner Annie Proulx infamously told the New York Times in 1994: "Nobody is going to sit down and read a novel on a twitchy little screen. Ever."

Today, no less than seven of her authored books are available in Kindle edition from Amazon.

Proulx was partly right. As an increasing number of people read digitized novels, the screens on which they read them are becoming much less twitchy.

The new generation of e-book reader devices uses Electronic Ink, instead of LCD, to make ultra-flat, low-power electrophoretic displays that are easy on the eyes and look roughly like a super high-resolution etch-a-sketch.

The first dedicated e-book device to integrate this technology was Sony's LIBRIe, which was introduced to the Japanese market in 2004.

A full two years later, the English-version Sony Reader was launched in the U.S. in September 2006. Its current PRS-505 edition, released in October 2007 with 8-level grayscale and now selling for $299, is the closest rival to Amazon's $349 Kindle.

iRex Technologies' higher-end (and much pricier $699) iLiad, launched in July 2006 with WiFi access, pushes its electronic-paper display to 16 levels of gray and allows input via stylus on a A5-size touch screen, so it can actually be used like a paper notebook.

For E Ink, the next frontier is color.

Slowly but surely, we're getting closer to the magic.

Silicon Valley-based user-interface engineer Darryl Chin, 31, has been using an iLiad for the past year, but now has his eye on the Kindle.

His wish list for improvement, however, is noteworthy: "Different screen-size choices, both bigger and smaller. Faster refresh rates. A well-thought-out user interface (both menu systems and button layouts). A smaller keyboard, or slide-out/removable, or even virtual (with touch sensitivity), so it's almost all screen."

"The main thing," he continues, "and seemingly always will be with e-books, is content. Give me all the books I want. Like CDs to MP3s, give me everything I can get physically, digitally."

Stepping back from the fray, Rita Toews, author of several e-books and founder of the annual "Read an E-book Week" in March, dismisses the false competition between e-books and paper books.

"E-books are great for people who travel a lot on business, for vacationers, or for people with limited space," she says. "They are also the perfect application for material that changes on a continual basis."

"Print books, on the other hand, have their place. Nothing can replace a beautiful art book, or a book of photography. E-books are simply a different format for something we've had for hundreds of years. When penny dreadfuls were introduced in the 1800s they were scoffed at, as were paperback novels in the 1930s."

Also in the 1930s, as farmers were being signed up for rural electrification, one of the most common responses was: "Why do we need electricity? We have lanterns!"

Let there be light, and give us our magic scrolls.