Does touchless tech point the way ahead?

(CNN) -- The screen of Apple's iPhone has focused much attention on touch as a user interface. iPhone users can rotate and resize images with finger gestures for instance. 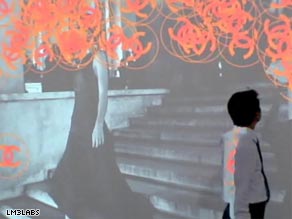 As well as personal computing, LM3Labs' touchless technology has been used in public spaces.

Many personal computers will likely have similar screens in the near future. But touch interfaces are nothing new -- witness ATM machines.

How about getting completely out of touch? A startup called LM3Labs says it's working with major computer makers in Japan, Taiwan and the US to incorporate touchless navigation into their laptops.

Called AirStrike, the system uses tiny charge-coupled device (CCD) cameras integrated into each side of the keyboard to detect user movements.

You can drag windows around or close them, for instance, by pointing and gesturing in midair above the keyboard.

You should be able to buy an AirStrike-equipped laptop next year, with high-end stand-alone keyboards to follow.

Any such system is unlikely to replace typing and mousing. But that's not the point. AirStrike aims to give you an occasional quick break from those activities.

"Varying postures is a good thing," notes David Rempel, an ergonomics expert and professor of medicine at the University of California at San Francisco.

While long durations of using AirStrike would lead to shoulder and neck pain, "it may help relieve fixed static postures" if used infrequently as intended.

So when to use AirStrike?

Certainly not for typing -- stick to your keyboard for that. Precise clicking? Nope, your mouse or trackpad is better for positioning the cursor in small boxes.

But to browse or turn pages or grab elements, why use a mouse when a swipe of the finger will do?

"It comes naturally, instantly," says Nicolas Loeillot, cofounder and managing director at LM3Labs. "You can use a mouse to browse content, but once you have AirStrike on your machine, it is far easier to use than the mouse."

Consider, he says, all the steps involved in moving a window on your screen. Normally you reach for the mouse, search for the cursor, position it at the top of the window, press the mouse button, drag the window, and then release the button.

With AirStrike, you grab it in the air and put it where you like. Of course a touch screen on your computer would also make this task easier, except your finger might leave marks, and you'd have to reach a bit further. Either way, at least it's a change up.

To prevent accidental "readings," the AirStrike system won't react if you move your hand across the keyboard -- reaching for coffee, say.

But the millisecond your hand stops above keyboard, AirStrike interprets the scene, tracking the specific shape of your hand and fingers. (Manufacturers will likely add a toggle function -- a keystroke, perhaps -- so you can turn AirStrike on and off.)

The next frontier in universal interface

The startup's patents involve the use of cameras with a mathematical model for tracking the finger accurately in the air.

"We can triangulate a fly in the air in real time," claims Loeillot. LM3Labs hopes its touchless technology will become commonly used for controlling TVs, video games and computers.

Meanwhile it's competing in the interactive wall and floor advertisement space, where virtual objects in the ad respond to the physical movements of customers and passersby.

The company started off in France, but after noticing interest from Japanese heavyweights like NTT DoCoMo and NEC, it also set up shop in Tokyo and focused on expanding in Asia.

What might prove most significant about touchless tech is the way no directions are needed. Whether it's using AirStrike, spinning the holographic globe or playing with the objects in the ads, it's all intuitive.

"The next frontier is a universal interface that anyone can use without any previous experience," says Loeillot.

For now, most of us are stuck with yesterday's tools. The mouse, nearly three decades old, was what we used long before web pages appeared, not to mention cool new tools like PicLens, which creates a 3D wall of online photos and videos -- perfect for AirStrike.

The good news is there's "a major wave in usability currently sweeping across the computing and mobile device space," points out Sebastian DiGrande, a partner at the Boston Consulting Group covering technology, media and telecommunications.

If it delivers, AirStrike will be a welcome addition to that wave.

All About Information Technology • Science and Technology