(CNN) -- Residents of Second Life, the online virtual environment, can do all kinds of things they can't in real life: fly, mute other voices, even transport themselves from one location (or "sim") to another. 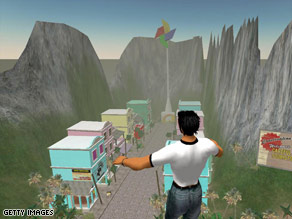 Real-life human anger even can spill over into Second Life, the online virtual world.

But though they may be godlike online, they're still human in real life -- and like all humans, they can become victim to their emotions.

"I have been in many situations over the past two years in Second Life where people have been rude, overly aggressive, bullying me by tracking me down using my profile and flaming [me] with words or grief," said Anoron Hanson, a Second Life regular, in an e-mail interview.

Rekka Berchot, another Second Life citizen, says she believes that people act differently in SL than they do in real life, or "RL," as Second Lifers call it.

"You don't use filters as much in Second Life," she said. "I find that there are things about yourself that come out in Second Life that [don't] in real life."

If you are attacked in Second Life, she adds, there's little you can do besides file an abuse report; SL players can boot others off their sims, but the effect is generally temporary. Better, she says, is to control the other person through your own cleverness: freezing their avatar or muting their "voices." (Berchot added that "I've been known to use kung fu.") iReport.com: Reduction in nonverbal communication leads to misunderstandings

But, in general, what works best is to try to understand the reason for the other's behavior, says Hanson.

"I believe one can try and assess their own behavior responsibly so when we encounter such individuals we are prepared for a response that will either calm the person or leave them disinterested and go about their business elsewhere," he said. "[I] smile or laugh and tell them how clever they are for doing what they did."

He says Second Life, in general, is a good life: "Those who take the time to really find out how to live and thrive in SL safely and still have fun are the ones who will last the longest," he said. iReport.com: Jealousy and fantasy play out in a virtual world

"There is nothing you can do about the flaming. It is here to stay. You have to remember that a great deal of us online are often ill or restricted in some way in their real lives," he observed. "My point is, there is nothing you can do save to keep the rules in place and moderate the situation. It is a free country, just let the poor bastards vent their frustrations."

All About Second Life • Internet