(CNN) -- Bullets were pinging off our armor, all over our vehicle, and you could hear multiple RPGs being fired, soaring through the air every which way and impacting all around us. All sorts of crazy insane Hollywood explosions were going off. I've never felt fear like this. I was like, this is it, I'm going to die. 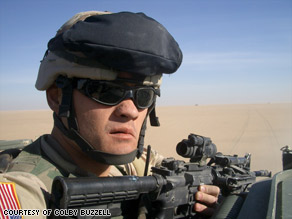 When U.S. Army machine gunner Colby Buzzell began blogging about his combat experiences from a military base in Mosul, Iraq, he wasn't looking for attention or trouble. Buzzell just wanted a way to chronicle what he saw and did and felt during the Iraq war.

But his visceral, first-hand accounts were a bracing antidote to dry news reports and bloodless Pentagon news releases. In the first major war of the Internet age, Buzzell and other soldier bloggers in Iraq offered readers around the world unfiltered, real-time glimpses of an ongoing conflict.

"Here's a soldier in a combat zone ... writing about it and posting it on the Internet. I don't think that's ever been done in previous wars," Buzzell said.

"It just provides another perspective that no embedded journalist can ever do," said the veteran, now a freelance writer in San Francisco, California, and the author of "My War: Killing Time in Iraq." "An embedded journalist is just there observing. But a soldier writing about it -- you can't get more embedded than that."

See an interview with Buzzell »

A suburban skateboarder with punk-rock sensibilities, Buzzell had no background in creative writing before he joined the Army in 2002. Inspired by a Marine buddy and burned out by a string of dead-end jobs, he signed up after a smooth-talking recruiter offered a signing bonus and sold him on the Army "like it was some [expletive] Club Med vacation."

When Buzzell arrived in Iraq in November 2003, he didn't know what a blog was. But after he read an article about a blogger in Time magazine in June 2004, he began posting anonymous journal entries on the Web under the nickname CBFTW (Colby Buzzell F--- The War).

"The only writing I knew how to do was ... like I was telling a story to the person next to me," he said. "I'd go to the Internet cafe [at the Army base], and my ears would still be ringing from whatever the experience [was] that day. There were times when I couldn't type fast enough."

Over the next six weeks, Buzzell wrote brutally frank, profanity-laced posts about the terror, tedium and misadventures of an infantryman's life in Iraq. At first, few people seemed to notice. But word spread, and before long he was getting hundreds of e-mails a day from readers.

Parents of troops in Iraq wrote to thank him for helping them understand their children's wartime perspective. One reader said they found Buzzell's blog more informative than the war coverage in The New York Times. Buzzell even heard from a sympathetic Iraqi in Baghdad who prayed for his safe return to America.

But almost nobody -- not even Buzzell's wife -- knew that he was the blogger.

Then came August 4, 2004. Mosul erupted in gunfire, and Buzzell's platoon survived an ambush by swarms of black-clad insurgents wielding rocket-propelled grenades. Buzzell witnessed his platoon sergeant survive a bullet through his helmet and narrowly missed being killed himself.

The next day, Buzzell went online and found a few brief news reports of the firefight that killed at least 22 Iraqi insurgents and civilians. In his mind, the stories didn't begin to capture what happened. So he wrote a long blog post, titled "Men in Black," about the ambush.

I observed a man, dressed all in black with a terrorist beard, jump out all of sudden from the side of a building, he pointed his AK-47 barrel right at my f------ pupils, I froze and then a split second later, I saw the fire from his muzzle flash leaving the end of his barrel and brass shell casings exiting the side of his AK as he was shooting directly at me. I heard and felt the bullets whiz literally inches from my head.

The "Men in Black" post attracted media attention, and Buzzell was flooded with e-mails and interview requests from around the world. Based on his descriptions of the Mosul attacks, his commanding officers soon figured out that he was the blog's author.

The Army confined Buzzell to the base and began monitoring his posts. Then, after he posted an anti-Iraq war rant by Dead Kennedys singer Jello Biafra, they ordered him to stop blogging.

Buzzell's Iraq blog lasted just 10 weeks, but it helped pave the way for others to follow. Today, according to the Army, thousands of active-duty soldiers write some form of online journal, often known as a military blog or "milblog."

Pentagon security policy forbids soldiers to publish sensitive information, such as unit locations or the timing of military operations, that might put troops in harm's way. But beyond that, soldiers in Iraq and Afghanistan are encouraged to blog about military life, said Army Public Affairs Spc. Lindy Kyzer.

"We're actually entering an era of transparency, where we need to have our soldiers talk. It does open up risks. Once you post something, you can't get it back. But we trust our soldiers with a lot," she said. "They are our best spokespersons. They know what the life of a soldier is like, and it's important to convey that to the American people."

Blogging also helps soldiers process traumatic combat experiences that can be hard for them to talk about, Kyzer said.

Since leaving Iraq, Buzzell collected his wartime blog posts and journal entries into "My War," which was published in 2005. Excerpts from his Iraq blog also appeared in the Oscar-nominated documentary "Operation Homecoming: Writing the Wartime Experience."

The war cost Buzzell his marriage and left him with post-traumatic stress disorder, a diagnosis that helped him avoid being redeployed to Iraq last spring. Now 32, he contributes regular features to Esquire magazine and hopes to write another book, the contents of which he's not ready to discuss.

Buzzell is no fan of the Iraq conflict, although he's heartened that active-duty soldiers are still reading "My War."

"The book is being passed around over there, which is kind of surreal," he said. "I do get e-mails from soldiers over there. Guys will say, 'Thanks for getting our story out,' or 'Things haven't really changed that much since you were here.'

"Looking back now, I don't think we had any business [in Iraq]," said Buzzell, who wants to see President-elect Barack Obama end the war. "Hopefully, he gets us out of Iraq in a way that's not a disaster or that gets a lot of soldiers killed."

All About Blogs and Blogging • U.S. Army Activities • Iraq War