(CNN) -- For some, "telemedicine" brings to mind remote-controlled surgery, or x-rays from Houston being read by radiologists in Bangalore. 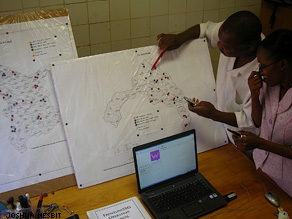 But suppose there's no Internet access to relay the images and signals. What if electricity is unreliable or unavailable?

In impoverished rural areas across the globe, that's the reality faced by health workers. For them, hope for telemedicine is more readily found in the spread of cell phone networks and simple text messaging.

A project in rural Malawi demonstrates why.

Set up this summer by Josh Nesbit, a student of international health and bioethics at Stanford University, the project is helping the tiny St. Gabriel's Hospital in Namitete better serve the quarter million people living in the surrounding 100-mile radius.

Most of the population gets by on subsistence farming and earns less than a dollar a day, and they often lack basics like transportation and electricity.

Many have to walk miles to the hospital in the mere hope of seeing one of its few physicians.

The project relies on SMS, or text messaging, plus a single laptop using a GSM modem and running FrontlineSMS, a mass messaging program that's free to non-profits.

Dozens of volunteer health workers, each covering a different community, have been given cell phones notched with identifying numbers and loaded with prepaid airtime credit for communicating with the hospital.

An administrator manning the laptop back at the hospital can send (or forward) messages to all (or some) of the field workers. The volunteers can report on the condition of patients, or spare a home-care nurse a wasted trip to see a patient who's out selling maize.

They can also indicate if, say, a patient with tuberculosis is not following the strict routine of medicine required. Automated responses can be set up. If a volunteer sends a message with a drug name, the system automatically kicks back the correct dosage and other information.

The intentionally flexible software program was tweaked for this project so that airtime credit can be automatically sent to individual health workers upon request.

Their use of that credit is precisely recorded. "FrontlineSMS documents every incoming text, and everyone understands that $1 gets you ten messages," notes Nesbit.

The health workers are often impoverished themselves. Creating an airtime-credit system without room for abuse was a key innovation.

But take a few steps back. Internet access is unreliable at the hospital, and it's pretty much nonexistent in the surrounding areas, where electricity isn't a given either.

"There's no way any web-based program could work," notes Nesbit.

The SMS system, on the other hand, has made a significant difference for health workers and their patients. For the volunteers, their role as legitimate healthcare representatives has been solidified by the stronger connection to the hospital (its logo being put on the cell phone helps, too).

Charging the cell phones can be a challenge for the volunteers in remote areas.

Pictures or videos could enhance text-only patient updates and requests for urgent care. Improvements are in the works and more will likely follow.

Electricity can be supplied by easily carried personal solar panels effective enough to charge a cell phone. A Cardiff-based solar technology firm called G24 Innovations will provide the Malawi project with such panels.

Camera phones will be used with an upcoming multimedia version of FrontlineSMS, planned for release around October 2009, according to Ken Banks, the consultant and software developer who created the original version.

The upshot is that cell phone-equipped health workers struggling in impoverished rural areas with neither Internet access nor electricity will soon be able to send text, pictures, and video using a low-cost messaging and airtime-credit relay system with a single laptop as the hub.

Eventually even the laptop -- the biggest hardware expense -- might be unnecessary, further lowering the barrier to entry.

One team of researchers is working on a version of FrontlineSMS to run on Android, the mobile platform from Google. So a single donated cell phone could be a messaging hub coordinating the activities of dozens of widely dispersed volunteers.

Another idea being batted around by Banks and others is running FrontlineSMS off a microSD card slotted into a GSM USB modem. Any computer, in an Internet cafe or elsewhere, could potentially be the messaging hub.

There's little reason to believe the Malawi project can't be replicated in other rural poverty zones -- as long as there's a cellular network.

The nurse using FrontlineSMS at St. Gabriel's, Alexander Ngalande, says he had never used a computer before yet had few difficulties. Many of the volunteer health workers had never used cell phones. Now the staff are finding innovations on their own.

"I really don't see anything stopping replication and expansion, given that a hospital, clinic, or organization finds such a network useful," says Nesbit.

All About Wireless and Mobile Networking • Health Care Issues