Making sense of the 'semantic Web'

(CNN) -- The "semantic Web" does not sound like it's fun and easy to use, but it could make surfing Web 3.0 a more rewarding and interactive experience. Some believe it could even lead to a new form of artificial intelligence. 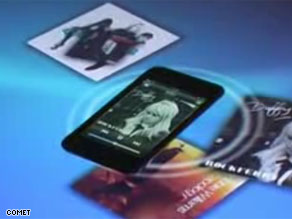 Spotlets pop up on a 'semantic Web' kiosk run by a pair of German researchers.

The idea behind the semantic Web, very broadly, is that things on the Internet will be described with descriptor languages so that computers can "understand" what they are.

An object might be a marked as a car part or a person, for instance. If objects were thus identified, an enormous network of linked data would emerge and machines, with their vast processing speeds, could suggest surprising and useful links that the human mind could never come up with, posing the possibility of a new sort of artificial intelligence.

The semantic Web is considered a key part of the upcoming "Web 3.0." It's starting to occur here and there, but widespread adoption is still a long way off.

A pair of German researchers have created an experimental kiosk that lets you easily use semantic Web capabilities -- even if you have no idea what they are. All that is needed is an iPhone and a finger with which to drag icons around on the kiosk's touch screen.

The kiosk takes advantage of the fact that MP3 files are "things" that have already been described in ways that machines can understand. That's because they have ID3 tags, which supply information on the artist and album.

An MP3 file on an iPhone is already a semantic annotated object, which means it's easily read by a computer.

Place the iPhone on the kiosk's surface and a circle appears around it. Next to that automatically appears a list of songs arranged by artist, title or genre.

Nearby on the screen are various "spotlets," intelligent agents that can perform different actions with the objects. One spotlet, for instance, plays MP3s that are dragged on top of it. There's also a YouTube spotlet.

Suppose you want to find videos related to Coldplay. Place your finger on the band's icon next to your phone and simply drag it on top of that spotlet. Instantly, icons for the first five videos from the YouTube search results appear around the spotlet.

Unwittingly, you've just done a search using semantic Web capabilities. Now, if you drag one of those icons onto the spotlet, the video will play. (Click here to watch a demonstration.)

These are just simple examples. Much more can be done with the system.

Other semantic Web tools are not nearly as fun. Consider, for instance, SPARQL, a query language. To find, say, music artists associated with the producer Timbaland, you'd have to type a long piece of convoluted code that most of us wouldn't bother to do.

"Complex operations should be hidden," says Simon Bergweiler, who along with fellow researcher Matthieu Deru, created the kiosk project at the Advanced Tangible Interface Lab at the German Research Center for Artificial Intelligence in Saarbrücken.

The team also will soon launch a Web-site version of their system, where users can drag icons with a cursor instead of their finger. Users also can employ speech commands, which has interesting implications for home entertainment systems.

But what the team really liked was the use of natural gestures.

"Via simple gestures, one can interact with content of Web 3.0 knowledge-bases without concrete knowledge of SPARQL or other Web 3.0 components," notes Bergweiler.

The idea is that their system can be used for quick and precise interaction with any rich semantic content. Real-world settings might include heavily trafficked places like airports or train stations, where they envision their kiosk ending up in the future. (They don't actually like the word "kiosk" -- they prefer "shared interaction space.")

You might want to quickly play a video from your iPhone to a group of friends, for instance, on a larger screen without the hassle of AV cables or any other setup.

"The idea of in-the-moment sharing and exploring in a public place, or even as a public event, is a very interesting one that I am surprised hasn't shown up in bars and at concert events," says Andrew Hawn, a strategist with consumer trend research firm Iconoculture.

Garage mechanics could also use such kiosks. Suppose mechanical parts have RFID antennas with semantic product memory. In that case, you could get technical data simply by placing a part on the surface of the kiosk.

The German team will soon set up interactive kiosks for German libraries to help visitors perform searches that involve context. Consider, for instance, searches like this: "Violin concerto compositions written by Mozart when he was in Salzburg." Or: "Books written by Nobel prize winners of the last decade."

Google and most other search engines cannot easily help with the desired context. "Only context information that contains the semantics can resolve and give an answer to these questions," notes Bergweiler.

A few new Web sites, like Cluuz.com, attempt to use semantics for better searching, albeit with their own approaches to the challenge.

Cluuz does better than Google with "Nobel prize winners 1990s," but it's worse at many other queries.

The semantic Web, when and if it fully blooms, will complement, not replace, the current Web. What's missing so far are enough fun ways to use it.