LONDON, England (CNN) -- Always short of time? Not enough moments in the day? Tonight you'll get an extra second to enjoy 2008. Use it wisely; perhaps an extra long smooch is called for. 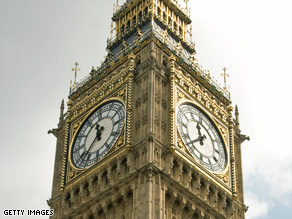 An extra second will be added to 2008 to align clocks with variations in the Earth's time.

Immediately before midnight a leap second -- the first for three years -- will be added to atomic clocks around the world by official timekeepers.

"The difference between atomic time and Earth time has now built up to the point where it needs to be corrected, so this New Year's Eve we will experience a rare 61 second minute at the very end of 2008 and revelers... will have an extra second to celebrate."

Traditionally time has been based on the passage of the Sun across the sky -- a modern version of this is still used by astronomers to track distant stars and spacecraft.

However, since 1967, an atomic timescale -- the extremely accurate Coordinated Universal Time (UTC) -- has been the world's official clock and is used for broadcasting time signals across the world.

The accuracy of UTC is essential for the smooth running of the Internet.

By comparison, the Earth is far less reliable. It does not rotate at a constant speed -- it can even wobble -- and disruptions to its core, extreme weather, volcanic eruptions and earthquakes can influence the length of a day.

Therefore, leap seconds are occasionally added to align atomic time with astronomical time and ensure that the Sun remains overhead at noon.

Whibberley told British media anyone sober enough and who had a digital clock that picked up leap second information from a reliable source, would see the final seconds of 2008 as 57, 58, 59, 60, 00 -- with 60 being the extra second.