(CNET) -- Yahoo and Intel built their success upon widespread use of personal computers, but the two companies hope products to be shown at next week's Consumer Electronics Show will mark the beginning of their Internet-fueled expansion to the world of TV as well. 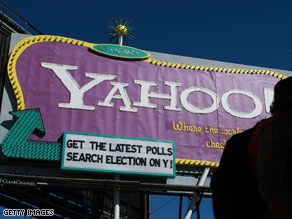 Yahoo and Intel hope next week's CES show will mark the beginning of their expansion to the world of TV.

The two companies have attracted several significant manufacturing and content allies in the attempt to bring new smarts and interactivity to a part of the electronics world that has remained a more passive part of people's digital lives.

Intel and Yahoo showed off Net-enabled TV prototypes in August, but the companies' technology will be presented in more finished form at the electronics show within products by Samsung, Toshiba, and a number of new partners that have signed on since the debut.

What exactly are they trying to achieve? For Yahoo, it's establishment of the Widget Channel, a software foundation that can house programs for browsing photos, using the Internet's abundant socially connected services, watching YouTube videos, or digging deeper into TV shows -- and through which Yahoo will be able to show advertisements.

For Intel, it's a foothold in an industry whose microprocessors have typically been cheaper, less powerful, and less power-hungry.

But for both companies, TVs are terra incognita. "We emerged from the ocean of the PC," Barry said.

Despite years of effort, the idea to put media-centric PCs in the living room hasn't caught on widely. But Intel, stung by its poorly received Viiv brand, has been taking the challenge seriously.

It even dispatched its top anthropologist--yes, the chipmaker employs anthropologists--to carefully study how people use TVs. In other words, Intel is trying to adapt to reality, not foist its ideas on an unwilling market.

Some people like to watch TV, but anthropologist Genevieve Bell, director of user experience for Intel, likes to watch people watching TV. Specifically, Intel concluded that unlike the PC, TVs are social. People watch it together, and what they watch turns into what they talk about. Another difference from PCs: it must be simple and reliable, she said.

When bringing the Internet to the TV, "You couldn't just turn it into a PC," she said.

And it's pretty obvious why those not in the TV market would be angling for a piece of the action. People in the U.S. spend about 5 times more time watching TV than using a computer, Bell said. Globally, it's a factor of 25; unusually, the TV and PC time is at parity in Israel, perhaps because of communication habits, she added.

For decades, people have been accustomed to advertising-supported television. The Widget Channel technology opens up some new horizons for Yahoo, though Barry said the company isn't going to rush to plaster sponsorships over the new interface.

"We have a lot of support from the advertising community, but we're focused on the consumer now," Barry said. "What you'll see initially is us trying to fall all over ourselves trying to make the consumer happy. The advertisers understand that." He wouldn't comment on when advertising will be launched with the technology.

Although Yahoo will eventually show ads, it won't have a lock on them. Barry said: "We are not going to be locking down anything from a walled garden perspective, including monetization. We get a nice advantage, knowing the ins and outs, but we will not limit the platform to being addressable by us."

There are many opportunities for ads, including the dock that can be shown across the bottom of the TV screen and in pages that fill the screen.

The Widget Channel technology is based on the Widget Engine software Yahoo got in 2005 with its acquisition of Konfabulator, and it lets programmers write a wide variety of applications.

Intel learned from initial testing of the TV technology, Bell said. For one thing, the company found that people didn't like the Widget Channel controls appearing on the left edge of the screen, one option the companies had demonstrated. Instead, people prefer the bottom, where they're accustomed to seeing text already.

For another, she said, people expressed a powerful desire for a big button to make the software go away in one fell swoop--no menus or arrow keys or complication--so they could get back to watching TV when they wanted. That big button is also used to activate the Widget Channel.

And nobody wanted yet another remote control.

To help chart its long-term course, Intel gauged consumer sentiment in part by asking what people thought the future of TV would look like. People's answers generally fit into a few categories:

• Something that would provide relevant information in real time, such as the weather right before heading to a sporting event.

• Something that would connect them to other people they care about, a variation of social networking.

• Something that would let them participate more with what they're watching, for example by figuring out where a show's cast members already had acted, or finding, rating, and sorting content.

Few, though, wanted a full-on Web browser, nor a keyboard to clutter up the room.

Yahoo sees the same fallow ground as Intel in the market.

TV innovations that have succeeded focused on screen size, image fidelity, and flat-screen technology, Barry said. "But the consumer electronics industry has not really explored the...connectivity that the Internet provides."