A timeline of climate change science

LONDON, England (CNN) -- Climatology was once a small and often overlooked branch of science. But important discoveries made as early as the 19th century have contributed to what is the most important field of scientific study in the world today. Listed below are some key dates in climate change history. 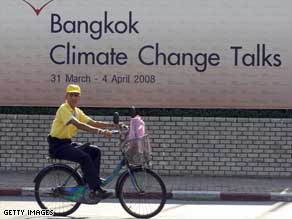 April 2008: Negotiators from 180 countries are attempting to draft a plan against global warming. According to a UN official these climate change talks could lead to the most complicated treaty in history.

Irish physicist John Tyndall carries out research on radiant heat and the absorption of radiation by gases and vapors including CO2 and H2O. He shows that carbon dioxide can absorb in the infrared spectrum, and it can cause a change in temperature. Tyndall famously declares: "The solar heat possesses. . . the power of crossing an atmosphere. But when the heat is absorbed by the planet, it is so changed in quality that the rays emanating from the planet cannot get with the same freedom back into space. Thus the atmosphere admits of the entrance of the solar heat, but checks its exit. The result is a tendency to accumulate heat at the surface of the planet."

Swedish chemist Svante Arrhenius first proposes the idea of a man-made greenhouse effect. He hypothesizes that the increase in the burning of coal since the beginning of industrialization could lead to an increase in atmospheric CO2 and heat up the earth. Arrhenius was trying to find out why the earth experienced ice ages. He thought the prospect of future generations living "under a milder sky" would be a desirable state of affairs.

British engineer Guy Stewart Callendar compiles temperature statistics in a variety of regions and finds that over the previous century the mean temperature had risen markedly. He also discovers that CO2 levels had risen 10 percent during the same period. He concludes that CO2 was the most likely reason for the rise in temperature.

John Hopkins University researcher Gilbert Plass proves that increased levels of carbon dioxide could raise atmospheric temperature. By 1959 Plass is boldly predicting that the earth's temperature would rise more than 3 degrees Fahrenheit by the end of the century.

In the same year chemist Hans Suess detects the fossil carbon produced by burning fuels, although he and Roger Revelle - director of the Scripps Institute of Oceanography - declare that the oceans must be absorbing the majority of atmospheric carbon dioxide, they decide to conduct further research.

Revelle and Suess employ geochemist Charles Keeling to continuously monitor CO2 levels in the atmosphere. After only two years of measurements in Antarctica an increase is visible. The graph becomes widely known as the Keeling Curve and becomes an icon of global warming debate and continues to chart the year on year rise in CO2 concentrations to this day.

The first World Climate Conference is held in Geneva attended by a range of scientists and leads to the establishment of the World Climate Program.

Scientists at the World Climate Program conference at Villach in Austria confidently predict that increased CO2 concentrations will lead to a significant rise in the mean surface temperatures of the earth. A hole in the ozone layer is discovered over Antarctica.

Officially the hottest year on record to date. Three years later the 1980s is confirmed as the hottest decade since records began.

The Intergovernmental Panel on Climate Change (IPCC) is set up by the World Meteorological Organization (WMO) and by the United Nations Environment Program (UNEP). The IPCC will provide reports based on scientific evidence which reflect existing viewpoints within the scientific community.

Parts of the Mississippi river are reduced to a trickle and Yellowstone National Park becomes a tinderbox. In June, Dr James Hansen of the NASA Goddard Institute for Space Studies delivers his famous testimony to the U.S. Senate. Based on computer models and temperature measurements he is 99 percent sure that the [human caused] greenhouse effect has been detected and it is already changing the climate.

The IPCC delivers its first assessment on the state of climate change, predicting an increase of 0.3 °C each decade in the 21st century -- greater than any rise seen over the previous 10,000 years.

The United Nations Conference on Environment and Development -- better known as the Earth Summit -- takes place in Rio de Janeiro attended by 172 countries. It is the first unified effort to get to grips with global warming and leads to negotiations which result in the Kyoto Protocol.

The hottest year on record. Four years later the 1990s are confirmed as the hottest decade in 1000 years.

The IPCC report for that year states that "the balance of evidence suggests a discernible human influence on global climate."

The Kyoto Protocol: Industrialized countries agree to cut their emissions of six key greenhouse gases by an average of 5.2 percent. Under the terms of the agreement each country -- except developing countries -- commits to a reduction by 2008 -- 2012 compared to 1990 levels. Notably, the U.S. Congress vote 95 to 0 against any treaty which doesn't commit developing countries to "meaningful" cuts in emissions.

Newly elected U.S. President George W. Bush renounces the Kyoto Protocol stating that it will damage the U.S. economy. The third IPCC report declares that the evidence of global warming over the previous 50 years being fueled by human activities is stronger than ever.

Europe experiences one the hottest summers on record causing widespread drought claiming the lives of over 30,000 people.

Following ratification by Russia -- the 19th country to do so -- in November 2004, the Kyoto Protocol becomes a legally binding treaty. America and Australia continue their refusal to sign up claiming reducing emissions would damage their economies.

175 countries in total have ratified the Kyoto Treaty. Under new Prime Minister Kevin Rudd, Australia ratifies the treaty. The IPCC report for a fourth time states that "warming of the climate is unequivocal" and that the levels of temperature and sea rise in the 21st century will depend on the extent or limit of emissions in the coming years.

160 square miles of the Wilkins Shelf breaks away from the Antarctic coast. Scientists are concerned that climate change may be happening faster than previously thought.