Climate change: Time is running out

LONDON, England (CNN) -- It appears that the scale and seriousness of climate change is at last being grasped. In 2008, we stand on the brink of a historic consensus, not only between scientists, but in the corridors of political power and in boardrooms across the globe. 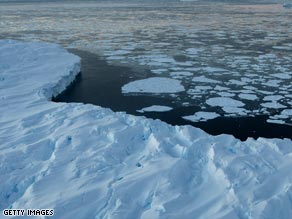 It's not difficult to understand why. Every week, newspapers and magazines report the latest data coming in from scientific study. And it's one way traffic, with every report, study or analysis pointing to one fact -- the world is warming.

In March this year the World Glacier Monitoring Service reported that glaciers are melting at their fastest rate in the past 5000 years.

As global warming starts to redraw the physical map, so our experiences of it are irreversibly altered. Human survival has been based on unrivaled adaptation to the environment, but plants and animals will and are inevitably succumbing to subtle changes in the climate.

Plagued by the chytrid fungus -- which has thrived as water and air temperatures change -- the Panamanian golden frog is all but extinct in the wild. Scientists have resorted to taking any they find out of their natural habitat and into captivity.

In the long term, our future is no less secure. We are already experiencing extreme weather events. The heat wave that struck Europe in 2003 claimed over 30,000 lives, while Hurricane Katrina, which devastated New Orleans in 2005, gave us a glimpse of what the future might be like.

The Intergovernmental Panel on Climate Change's (IPCC) fourth and most recent assessment report (AR4) was published in 2007. It makes for grim reading. Drawing on the collective expertise of scientists worldwide, it provides the most accurate and up-to-date information about the perilous state of our planet.

The picture painted is one of unprecedented change. And it's happening right now. Not only are poles and peaks melting, diseases -- including malaria, dengue fever and Lyme disease -- are moving northwards.

The IPCC's latest projections imagine a world where in 2100 temperatures will be between 1.8 to 4 ºC higher, sea levels will rise by 28 to 43 centimeters and heat waves and tropical storms will increase in their frequency and intensity.

Speaking after the publication of the report in February 2007, Achim Steiner, head of the U.N. Environment Program, said that it "marks the end-point of the debate" and that "the focus should now shift to policy."

"If we don't," Steiner continued, "the world will be in even deeper trouble than it is today and the price of not acting will go up with every year that passes."

This unequivocal assessment doesn't satisfy everyone though. Although looking increasingly beleaguered, skeptics can still be found scribbling away in the blogosphere. Some join together to form groups such as the Competitive Enterprise Institute (CEI), which describes itself as a non-profit public policy organization dedicated to advancing the principles of free enterprise and limited government. They argue that the global warming debate amounts to alarmism.

Solar intensity is often promoted as the reason why the world is heating, and studies of warmer periods in previous centuries suggest that the sun was probably responsible. In recent years the argument has proved a bit of a hot topic with skeptics and some studies have proved persuasive.

But more recently the theory has been derailed by new scientific data. Geophysicist Mike Lockwood from the University of Southampton believes that the sun's role in recent warming has been overemphasized.

All of us are now able to observe the changes taking place in the climate and in a sense we don't need the IPCC to tell us that the growing seasons start earlier and last longer. Or that migrating birds are arriving earlier and leaving later. We can see these changes with our own eyes.

This rather gentle precursor to the future doesn't convey the dangers which lie ahead. The worst predictions talk of biblical floods and appalling drought triggering disease, displacement, mass migration, conflict and ultimately the death of a large proportion of the world's population.

The IPCC has committed to continuing the progress made with the Kyoto Treaty. The Bali roadmap -- agreed in December 2007 -- re-emphasizes that further delays to deep cuts in global emissions will heighten the chance of catastrophic warming.

Many would echo the view of the eminent scientist Stephen Hawking who believes that climate change stands alongside nuclear weapons as the greatest threat to the future of mankind.